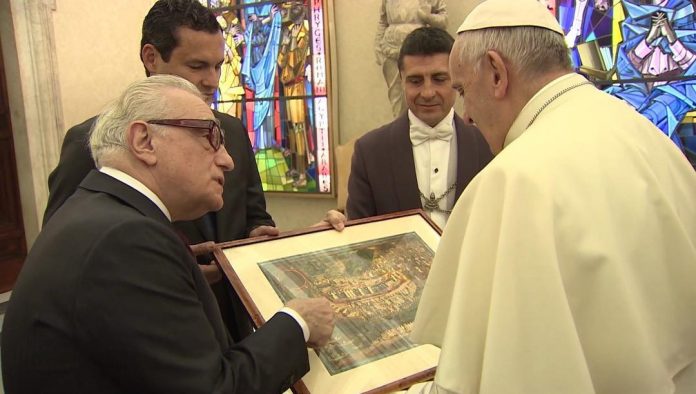 It is rare that the Vatican would announce ahead of time a meeting with the pope for an entertainment figure. However, the film is set to premier at the Vatican Thursday. Scorsese, who was raised Catholic, has said Silence is a passion project 27 years in the making. The film had a budget of $46+ million dollars.

Scorsese gave the pope framed images, including a reproduction of an ancient image of the Virgin of Nagasaki and a portrait of the “martyrs of Japan.” The pope gave the guests some rosaries. Scorsese has earned himself an Oscar nomination for Best Director for his film The Last Temptation of Christ, which some in the Catholic Church took issue with the film’s portrayal of Christ as a young, conflicted man with shocking dreams about Mary Magdalene.

Paramount will release the historical drama in New York and Los Angeles on Dec. 23 before expanding nationwide in January. It is set to hit theaters in Italy on Jan. 12.

Scorsese, who worked closely with Fabrica de Cine’s Gaston Pavlovich on the making of the film, wrote the screenplay with Jay Cocks (“GANGS OF NEW YORK”), based on the book “Silence” by Shusaku Endo. The film is produced by Scorsese and Emma Tillinger Koskoff “(THE WOLF OF WALL STREET”), along with Randall Emmett (“LONE SURVIVOR”), Barbara Defina (“GOODFELLAS”), Vittorio Cecchi Gori (“IL POSTINO”), Irwin Winkler (“CREED”). Producer Gaston Pavlovich’s company Fabrica de Cine also provided the lead financing for the picture, alongside Executive Producer Dale A. Brown of Sharpsword Films.