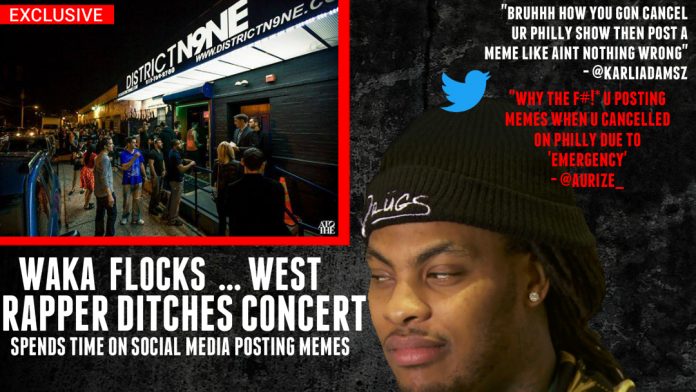 Waka Flocka Flame is a no show at a Philadelphia concert at District N9NE scheduled Friday, December 10. According to sources, Waka allegedly had a “girlfriend-family emergency.” However, Waka is married.

If the girlfriend excuse is true, it’d be the second time Waka cheated on his wife, Tammy Rivera. The rapper waited until 30-minutes prior to doors opening to notify the venue about the cancelation. Although the artist had time to Tweet out videos and post on Facebook when he should be performing, he didn’t make any announcements or apologize for skipping out on concertgoers.

Waka cancelled a show in May to reportedly attend rehab. Australia must be tired of the rapper, denying him a visa last year, forcing him to cancel the tour. The rapper indefinitely postponed (indefinite postponement..?) shows in Australia back in 2013 to work on the album Flockaveli 2.

Richard, owner of Philadelphia’s District N9NE declared that Waka would not be welcome at the venue for a future date. Additionally, the venue opened with the supporting acts taking center-stage. Richard has offered full refunds even if ticketholders attend tonight’s event, expressing “It is only fair.”

On the bright side, Philadelphia’s former mega club, Lit Ultrabar, denied the rapper access to the club after he got off a tour bus with his name painted on the side in 2013.

The promoter came outside to see what the commotion was about – stating, “Who the fuck cares who Waka Flocka Flame is?” as he walked back inside. Waka didn’t want to pay the mere $30 entry fee & was upset when he couldn’t bring an entourage of teenagers in.

Nevertheless, one member of the entourage, Lil Romeo, had no issues gaining access to the club.