Marple Township, Pennsylvania – Marple Township Police Department responded to a 911 call at 5:10 p.m. Sunday when a couple reported their child had been abducted. However, the criminal didn’t waste any time once he saw he committed more than a simple car theft.

While the parents of the child went inside a store at Sproul Plaza in Marple Township, they came out to find that their vehicle had been stolen – with the couple’s child still inside the car.

The assailant soon realized he was not alone in the vehicle, pulling to the side of the road only a few hundred feet away from the shopping center. He quickly abandoned the vehicle and fled on foot to avoid a kidnapping charge, a felony of the first degree. The punishment would carry a prison sentence of up to 20 years, much steeper than motor vehicle theft, which could carry a maximum of seven years in prison.

The Marple Township Police along with five neighboring police departments including, Haverford Police K-9, Newtown Township PD, Springfield PD and the Pennsylvania State Police searched the area in an effort to capture the assailant. However, according to Marple PD, the suspect was not located. Nonetheless, this is an ongoing investigation. If you’re the assailant & you’re reading this, the police are searching for you. Anyone with information leading to the apprehension of the suspect are urged to contact the Marple Police at 610.356.1500.

The child was recovered unharmed and still secured in the car seat. Marple Township Police were on location in under a minute following 911 call.

Following the incident, Lt. Brandon M Graeff posted on the Marple Township Police Department’s Facebook page, outlining the incident. Locals took to the page criticizing the parents for leaving the child unattended in a running car. 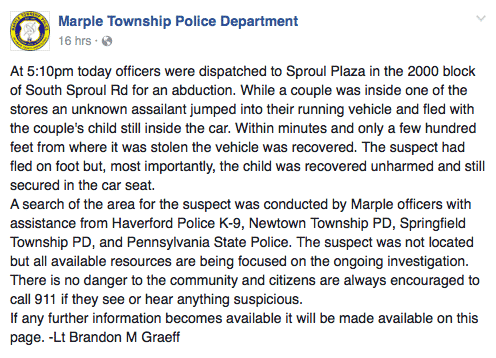