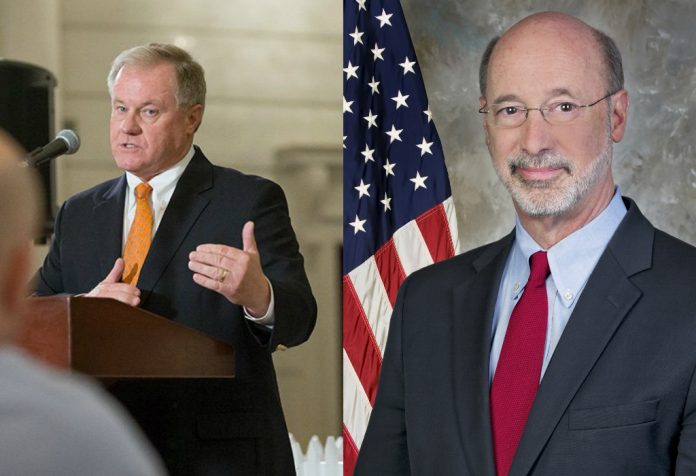 Pipersville, Pa. – Scott Wagner (R-Pa.) is the first candidate to formally announce he will pursue the GOP nomination to take on incumbent Gov. Tom Wolf at a news conference Wednesday.

Wagner visited Worth & Company, Inc., one of the most respected, full-service mechanical contractors in the mid-Atlantic region. Employing 500 people in Bucks County, which thrives on free enterprise, Worth & Co. hosted the event with Sen. Scott Wagner. Additionally, the company held an event with vice president-elect Michael Pence and president-elect Donald J. Trump while campaigning in in Pennsylvania.

“Its great to be here today – in another great Pennsylvania business,” Wagner started. “

Senator Wagner spoke of his background in business and roots in Pennsylvania. He was elected as a Pennsylvania state senator in March of 2014.

Wagner is tired of being used like an “ATM” machine by career politicians, who are “all talk and no action,” Wagner mentioned, adding “Steve Worth & I know more about the economy because we live it everyday. Governor Wolf is a failed governor, pure and simple.”

Wagner’s is a high school graduate, stating he did not attend college. He spent his childhood shoveling horse manure for $5.

“Tom Wolf is the guardian of special interest groups in Harrisburg. That’s why today, I am standing before you and officially announcing my candidacy for Governor of Pennsylvania. It’s time to tell the truth.”

Why Scott Wagner is running for Governor

Scott Wagner mentioned he is tired of being used like ATM machines by career politicians who are all talk no action. Sen. Wagner’s company has been choked by regulations, dating back to his first company in 1985.

Business owners are tired of being treated like criminals every time the government stops by. “They [the government] only stop by to find you do something wrong & fine you – not to thank you for employing people,” Scott Wagner mentioned, he has a tremendous amount of people within his companies who are not protected in Harrisburg, which encouraged him to become a senator.