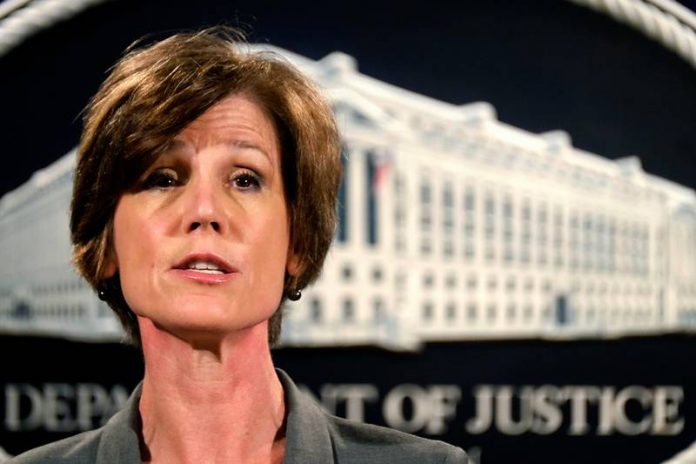 This is a developing story.
He is naming Dana Boente, U.S. Attorney for the Eastern District of Virginia, to serve in her place.
“Getting ahead of the threat is key,” Press Secretary Sean Spicer said moments ago. Additionally, Trump’s Administration mentioned acting after an attack is reactive – and the president will morning wait to be attacked before taking action.
[box type=”warning” align=”” class=”” width=””]Email us your thoughts or opinions and they can end up on YC.news! You may remain anonymous. Email us at – [email protected][/box]
[box type=”shadow” align=”aligncenter” class=”” width=””]

Statement from The White House

Statement on the Appointment of Dana Boente as Acting Attorney General
The acting Attorney General, Sally Yates, has betrayed the Department of Justice by refusing to enforce a legal order designed to protect the citizens of the United States. This order was approved as to form and legality by the Department of Justice Office of Legal Counsel.
Ms. Yates is an Obama Administration appointee who is weak on borders and very weak on illegal immigration.
It is time to get serious about protecting our country. Calling for tougher vetting for individuals travelling from seven dangerous places is not extreme. It is reasonable and necessary to protect our country.
Tonight, President Trump relieved Ms. Yates of her duties and subsequently named Dana Boente, U.S. Attorney for the Eastern District of Virginia, to serve as Acting Attorney General until Senator Jeff Sessions is finally confirmed by the Senate, where he is being wrongly held up by Democrat senators for strictly political reasons.
“I am honored to serve President Trump in this role until Senator Sessions is confirmed. I will defend and enforce the laws of our country to ensure that our people and our nation are protected,” said Dana Boente, Acting Attorney General.