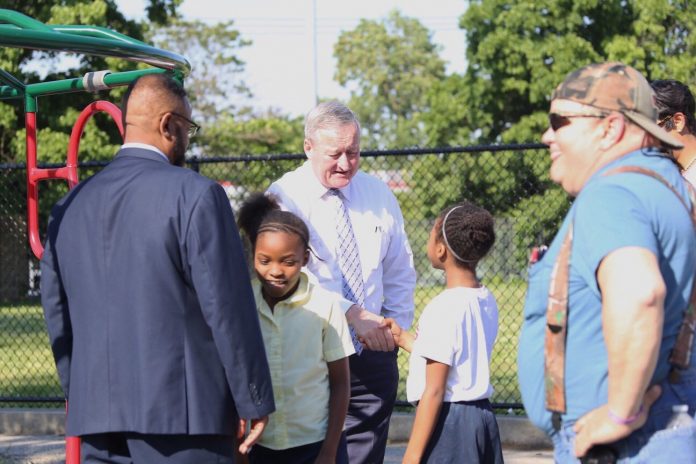 Philadelphia, Pa. – As part of a larger effort to highlight the need for Rebuilding Community Infrastructure (Rebuild), Mayor Jim Kenney, joined by City Councilman Curtis Jones, Jr., Rebuild Executive Director Nicole Westerman and Philadelphia Parks and Recreation Commissioner Kathryn Ott Lovell, toured Tustin Playground in Overbrook. The tour showcased many of the improvements needed at the site, including a total plumbing restoration and bathroom overhaul, new floors, windows and doors, new playground equipment, and repairs to the fence, in addition to making the facility ADA (Americans with Disabilities Act) compliant.
“The current state of facilities across Philadelphia’s parks and recreation and library systems is dire. Nearly every site needs attention and has for years,” said Mayor Kenney. “Rebuild is our chance to change the state of our system and to invest in the transformation of our neighborhoods, one public space at a time. We owe it to residents to make every neighborhood park, recreation center, playground and library the best space it can be – ADA compliant, safe and engaging. Philadelphians have waited long enough.”
During the tour, Mayor Kenney and Councilman Jones also visited the afterschool and baseball programs and spoke with residents about Tustin, what it needs and what it means to the community.
“Tustin Recreation Center was purchased by the City of Philadelphia on February 7, 1949 and is located in the working class neighborhood of Overbrook,” said Councilman Jones. “It serves as more than just a recreation center. It is utilized by sports, education, and civic organizations and serves as a town hall. We must invest in both capital and program dollars that keep Tustin vibrant.”
Tustin Playground is a 4.3-acre facility with a baseball field, pool, sports field and two basketball courts. It has an active afterschool, performing arts, sports and fitness programming schedule year-round.
“Tustin Playground, like many of our facilities across the city, desperately needs capital improvements,” said Parks and Recreation Commissioner Kathryn Ott Lovell. “The residents of West Philadelphia deserve high-quality facilities that are welcoming and fully operational. The Rebuild initiative will help us achieve those goals and more.”
Rebuild (Rebuilding Community Infrastructure) is a seven-year, $500 million investment in Philadelphia’s parks, recreation centers, playgrounds and libraries. Proposed in Mayor Jim Kenney’s first budget as a part of his vision for a more equitable Philadelphia for all, Rebuild seeks to revitalize pivotal community spaces, empower and engage communities, and promote economic opportunity through diversity and inclusion. Rebuild is a public private partnership made possible by the Philadelphia Beverage Tax.
“Many facilities in the library and parks and recreation systems, despite the great work done at these sites by PPR staff and engaged community members, are unable to serve their constituents to the highest standard due to the physical limitations of their space,” said Executive Director Westerman. “But with the kind of targeted investment that Rebuild will bring to sites, our public spaces will see real change. At Tustin, for example, high-quality bathroom facilities with upgraded plumbing and new playground equipment could increase usership and programming opportunities.”