Mexican cartel leader walks to U.S. border and turns himself in
M 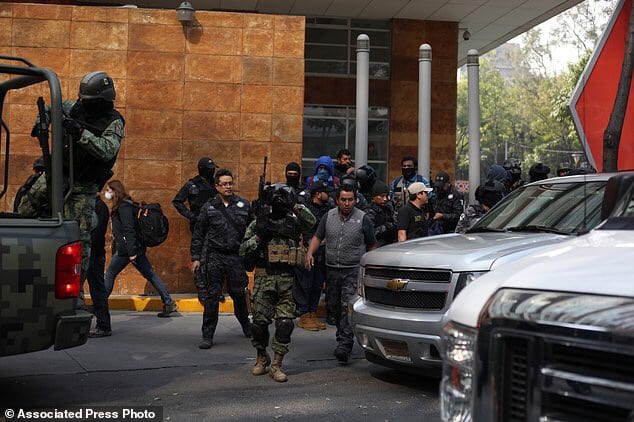 Lopez-Serrano, 29, is believed to be the highest-ranking Mexican cartel leader ever to self-surrender in the United States. Lopez-Serrano was arraigned on an indictment returned by a federal grand jury in San Diego on August 19, 2016, charging him and five of his close associates, including Nahum Sicairos-Montalvo, aka Kinceanero, with Conspiracy to Distribute Controlled Substances Intended for Importation and Conspiracy to Import Controlled Substances.

United States District Court Judge Dana M. Sabraw arraigned Lopez-Serrano on these charges today and unsealed the indictment against these two defendants. Lopez-Serrano did not seek bond and will remain in custody. A status hearing is scheduled for November 2, 2017 at 10 a.m. before Judge Sabraw.

The announcement was made by Attorney General Jeff Sessions, Acting Assistant Attorney General Kenneth A. Blanco of the Justice Department’s Criminal Division and Acting U.S. Attorney for the Southern District of California Alana Robinson.

The United States also announced today the unsealing of an additional indictment returned December 4, 2016, in the Eastern District of Virginia by the U.S. Attorney’s Office for the Eastern District of Virginia and the Criminal Division’s Narcotic and Dangerous Drug Section charging father and son, Damaso Lopez Nunez and Damaso Lopez Serrano, respectively, with Conspiracy to Distribute Controlled Substances Intended for Importation. Damaso Lopez Nunez was arrested by Mexican authorities on May 2, 2017, and the United States is in the process of seeking his extradition on the December 4 indictment. Lopez Serrano will be arraigned on this indictment at a future date.

“At a time when more Americans than ever are dying from drug overdoses, the Department of Justice has made it a top priority to target the Mexican Cartel leaders responsible for the dangerous drugs that poison our families,” said Attorney General Sessions. “We will continue to go after these cartel leaders in order to dismantle their organizations from top to bottom, and today’s announcement should send them a clear message: you can turn yourselves in the easy way, or we will find you and bring you to justice the hard way. No matter what, you will face the consequences.”

“This extraordinary case is this district’s most significant, comprehensive and large-scale cartel prosecution,” said Acting U.S. Attorney Alana Robinson. “Today marks another important step in the dismantling of the Sinaloa Cartel and is a reflection of law enforcement’s focused efforts these last several years to put an end to this most powerful drug trafficking organization.”

“The arrest of this key cartel leader is a significant blow to the Sinaloa Cartel,” said DEA San Diego Special Agent in Charge William R. Sherman. “DEA remains vigilant in its mission to keep investigating this organization and arresting these individuals who sell their poison to the citizens of the United States.”

The Southern District of California indictment unsealed today marks the conclusion of the fourth phase of a five-year investigation that, in total, has resulted in charges against over 125 people and has had a significant impact on the worldwide operations of the Sinaloa Cartel. This investigation has also offered one of the most comprehensive views to date of the inner workings of one of the world’s most prolific, violent and powerful drug cartels. Cartel members and associates were targeted in this massive investigation involving multiple countries, numerous law enforcement agencies around the United States, a number of federal districts and over 250 court-authorized wiretaps in this district alone.

This case began in late 2011 as an investigation of what was at first believed to be a small-scale drug distribution cell in National City and Chula Vista. It became evident that the drugs were being supplied by the Sinaloa Cartel, and the case evolved into a massive multi-national, multi-state probe that resulted in scores of arrests and seizures of 1,397 kilograms of methamphetamine, 2,214 kilograms of cocaine, 17.2 tons of marijuana, 95.84 kilograms of heroin, and $27,892,706.00 in narcotics proceeds.

The primary indictment in this investigation was previously unsealed targeting the alleged leader of the cartel, Ismael Zambada-Garcia, known as “El Mayo,” as well as two of his four sons – Ismael Zambada-Sicairos, known as “Mayito Flaco,” and Ismael Zambada-Imperial, known as “Mayito Gordo.” Zambada-Imperial was arrested by Mexican authorities in November 2014 and is pending extradition to the Southern District of California. Also part of that indictment is Ivan Archivaldo Guzman-Salazar, known as “Chapito,” whose father Joaquín “El Chapo” Guzmán Loera was the alleged leader of the Sinaloa Cartel along with Mayo.

As part of this investigation, U.S. authorities previously arrested and prosecuted another son of Mayo – Serafin Zambada-Ortiz, who pleaded guilty in the Southern District of California in September 2014 to drug trafficking charges.

José Rodrigo Aréchiga-Gamboa, commonly referred to by his alias “El Chino Ántrax,” was arrested in the Netherlands, extradited to the United States by Dutch authorities in July 2014 and pleaded guilty to drug trafficking charges in May 2015. Arechiga-Gamboa is believed to have worked for the Sinaloa Cartel as the leader of a violent enforcement arm of the Sinaloa Cartel called “Los Antrax” and a key lieutenant of Mayo.

This case is the result of ongoing efforts by the Organized Crime Drug Enforcement Task Force (OCDETF), a partnership that brings together the combined expertise and unique abilities of federal, state and local law enforcement agencies. The principal mission of the OCDETF program is to identify, disrupt, dismantle and prosecute high-level members of drug trafficking, weapons trafficking and money laundering organizations and enterprises.