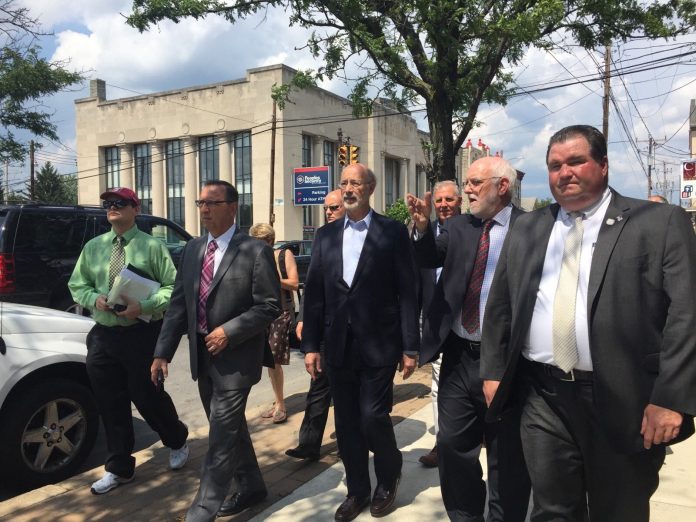 Harrisburg, PA (YC/Gov.) – To combat the use of illegal credit and debit card “skimmers” at gas stations and ATMs in Pennsylvania, four state government agencies have teamed up to raise awareness on the use of these devices. Skimmers are malicious card readers often attached to an actual payment terminal that can gather data from a credit or debit card’s magnetic stripe when inserted or swiped.

Today, during a public demonstration of how card skimmers operate, leaders from the Department of Banking and Securities, State Police, Department of Agriculture, and the Office of the Attorney General discussed their campaign to educate consumers, business owners, law enforcement, and gas pump inspectors statewide on the dangers of card skimmers.

“This collaboration is a prime example of the successes that can be achieved when government agencies work together for the protection and betterment of the citizens of our commonwealth,” said Secretary of Banking and Securities Robin L. Wiessmann. “Each of these state agencies has lent its specific area of expertise to this cooperative effort, helping businesses protect their customers and consumers protect themselves from financial scams.”

• Choose gas pumps that are closer to and within the line of vision of the cashiers.

• Use ATMs in well-lit, secure locations and avoid using ATMs that are stand-alone units in corners of stores or other out-of-the-way locations.

• Look at the card reader slot and surrounding areas to see if anything looks out of place, mismatched, or loose.

• Make sure no one is watching you enter your PIN (or possibly filming you on a cell phone).

• Consider using your credit card instead of your debit card to avoid compromising your PIN and to gain other consumer protections.

• Check your bank and credit card statements frequently to watch for fraudulent activity and report any unfamiliar activity immediately.

“The Office of Attorney General is working every day to protect Pennsylvanians who’ve been scammed, and we’re partnering with the Pennsylvania Banking and Agriculture Departments, as well as the Pennsylvania State Police, to help prevent consumers from being victimized by skimming devices at gas stations. Working together we can protect more Pennsylvanians from scams like skimming,” Attorney General Josh Shapiro said. “If you believe you’ve been scammed, call our Consumer Protection Hotline at 1-800-441-2555 or email us at [email protected]. We’re here to help you.”

As part of the campaign, the State Police officers and Department of Agriculture inspectors in the field log reported incidents into their respective tracking systems. This logged data is then analyzed to reveal state trends on the illegal use of skimmers and can lead to greater protections for consumers and business owners across the commonwealth.

“Department of Agriculture inspectors ensure that Pennsylvanians get what they pay for at the fuel pump,” said Agriculture Secretary Russell Redding. “While our staff check to see that pumps are operating accurately, they’re also watching for evidence of suspicious activity, like illegal skimmers that endanger consumers and businesses alike.”

“Card skimming is a serious offense that that not only affects customers and merchants locally, but has also been known to have links to international organized crime,” said State Police Commissioner Tyree C. Blocker. “As skimming devices and the criminals who use them become more sophisticated, law enforcement agencies must work together to protect consumers against this type of high-tech fraud.”

The four agencies have developed a handout to help identify card skimmers, know how and where to report them, and understand what actions consumers can take if they have been victimized. The handout can be downloaded for free: www.dobs.pa.gov/Documents/Publications/Handouts/SkimmingAlertCard.pdf.