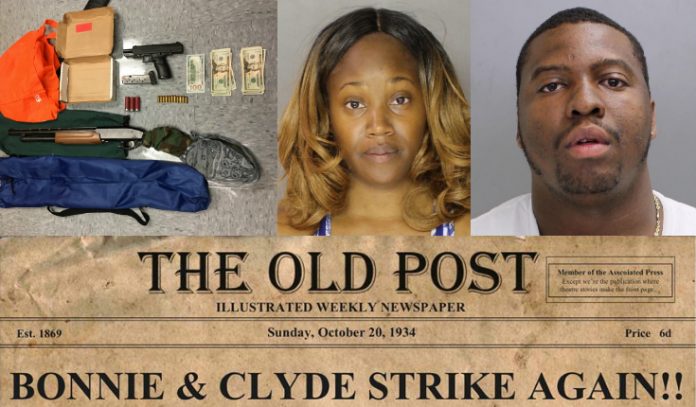 How does a career drug dealer mess up a murder-for-hire? He chose to hire a Chester County hitman with his girlfriend. What started off as a grand murder-for-hire scheme by a Pennsylvania couple backfired when Chester County Detectives arrested the duo yesterday for conspiracy and solicitation to commit murder, weapons charges, and related offenses.
Christopher Pickard, 29, and Latrice Harrington, 27, embarked on a search for an experienced hitman after Pickard believed a man ratted on him following his arrest for heroin distribution charges.
Pickard was given a phone number to an excellent candidate to carry out the hit, an undercover cop.
Pickard gave the cop a sawed off shotgun, .40 caliber semi automatic handgun and a $300 down payment and promised him an additional $1,700.00 & an ounce of dog food, codeword for heroin after his release on the previous drug charges.
Pickard’s girlfriend communicated with the hitman, providing him photos of the target via Facebook & Snapchat. She also recommended a good time of day to kill the target and provided the hitman with his address.
The hitman informed Harrington that the target had been murdered. “He’s dead…. the dudes gone and he’s not breathing and he’s out of the state many states away.”
Harrington thanked the hitman for the “good news” before informing her boyfriend.
“That thing is done,” Harrington told Pickard. “You don’t have to worry about someone anymore.”

“This is a clear example of the ‘Stop Snitching’ culture that is pervasive in drug cases and cities like Philadelphia,” Chester County District Attorney Thomas Hogan said. “Chester County law enforcement is always vigilant, and the criminals should be aware that they only make a bad situation worse for themselves when they try these tactics in Chester County. The Pennsylvania State Police and Chester County Detectives did an outstanding job in this case.”

Their vows could officially be “till’ justice do us part.”