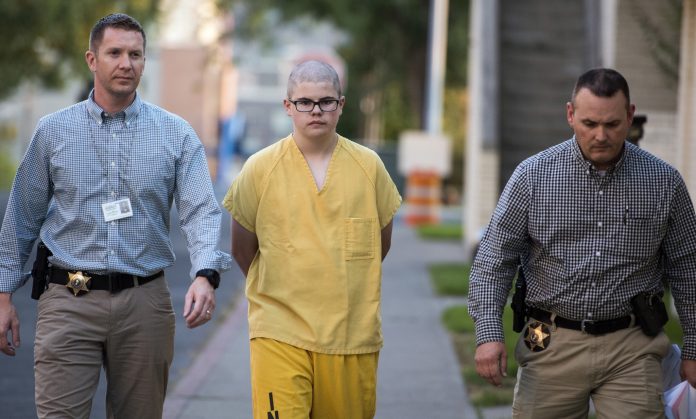 SPOKANE, Wash. (AP) — A 15-year-old boy accused of killing a student at his rural Washington state high school and wounding three others has pleaded not guilty to charges of first-degree murder and attempted first-degree murder, according to court documents made public Tuesday.

Caleb Sharpe, a sophomore at Freeman High School near the small town of Rockford, Washington, entered the pleas last Friday, the documents said.

He made the appearance in juvenile court but authorities have the option of seeking to have him tried as an adult and Spokane County Sheriff Sheriff Ozzie Knezovich has said Sharpe should face adult charges.

Prosecutors filed a subpoena asking the high school to release Sharpe’s transcripts, details of any disciplinary actions he has faced, any history of violent or disruptive behavior, truancy or drug or alcohol abuse.

The school with about 300 students is located near the Washington state border with Idaho. Classes were canceled last week after the shooting on Wednesday and resumed Monday.

Authorities said Sharpe brought a handgun and an assault rifle to school in a duffel bag he carried onto his high school bus.

The assault rifle jammed when he tried to load it inside the school and he pulled out a pistol and shot a 15-year-old classmate in the abdomen and face, killing him, court documents said.

The teen then walked down a hallway, firing at or into the ceiling and wounding three female students, authorities have said.

Sharpe told police that he had been bullied by the boy who died but did not target him specifically.

Two of the wounded girls have been released from a Spokane hospital.

The Spokesman-Review newspaper reported last weekend that Sharpe had been suspended for bringing threatening notes to school and that the shooting happened on the first day he had returned.

Documents and his classmates said Sharpe brought notes to school about doing “something stupid,” was obsessed with past school shootings and posted videos online that showed him playing with guns.

Sharpe also had been meeting with a school counselor because of suicidal thoughts and left a suicide note at home for his parents before the shooting, an investigator for the Spokane County Sheriff’s Office wrote in an affidavit.

Sharpe has been in custody since the shootings.

His family last week issued a statement expressing condolences and asking for prayers for the victims and their relatives. Sharpe’s parents and his lawyer were present during his court appearance.

The Associated Press doesn’t typically name juvenile suspects but is doing so because of the severity of the accusations and because Sharpe’s name was released in public documents.