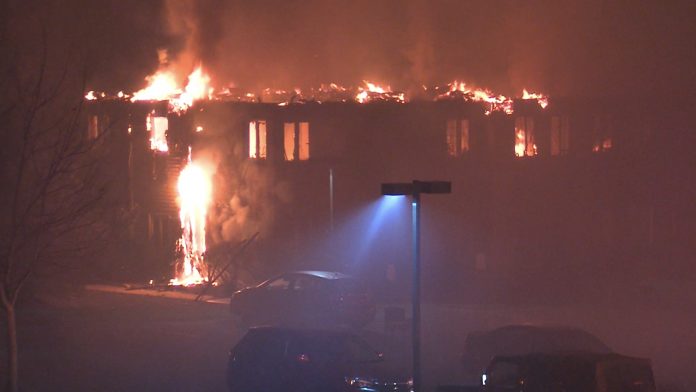 A fire ripped through a multistory nursing home in southeastern Pennsylvania late Thursday, injuring at least 20 people and forcing more than 140 people to evacuate into the cold night, officials said.

Emergency management officials said there were still hot spots more than 12 hours after the fire was declared under control, and that much of the burned-out complex was too unstable for investigators to enter.

The fire spread to multiple buildings, engulfing sections within minutes. A spokeswoman for the senior living centre said 132 residents were present when the blaze broke out. Emergency officials put the number of staff at 20; they were all accounted for.

Many of the residents were pushed in wheelchairs or rolled on beds to safety, said Dina Ciccarone, another neighbour who helped move people away from the fire and into safety. In some cases, she said, people used blankets as makeshift gurneys to assist in the rescue effort.

“Most of them could not walk,” the 37-year-old Ciccarone said. “Some were lying on the ground, we were just bundling them up.”

News helicopter coverage showed dozens of residents on the lawn or along the street, wrapped in blankets as overnight temperatures dipped into the low 40s. Elderly residents were loaded onto school buses early Friday and taken to nearby hospitals, witnesses said.

Chester County emergency officials said at least 20 people were taken to area hospitals for treatment. The extent of most injuries was not immediately known, though a Paoli Hospital spokeswoman said seven patients were admitted with issues related to smoke inhalation.

According to its website, Barclay Friends offers various levels of care including memory care, skilled nursing and post-acute rehab.

Early Friday morning, the local chapter of the American Red Cross said on Twitter it had multiple teams on the scene and that it was working with county officials and facility staff to assist displaced residents.