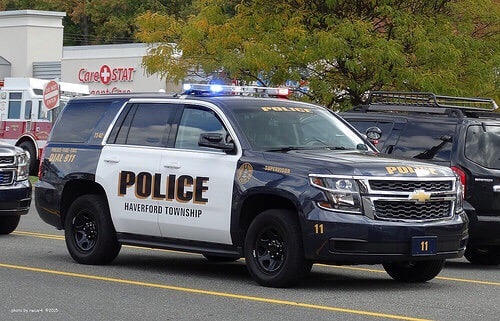 The first incident occurred on Sunday November 19th 2017 at approximately 8:30 pm., in the area of Eagle Rd and Sunnyhill Lane. The male victim reported being robbed at knife point by a black male who fled in a dark vehicle.

The victim advised that he was walking home on N. Eagle Road when he was approached by a black male who was wearing a tan trench coat over a red hooded sweatshirt. The suspect displayed a knife with a red handle, grabbed the victim by the arm, and demanded his phone and money.

The second incident occurred on Wednesday November 22nd 2017 at approximately 7:40 pm in the area of Eagle Road and W. Hillcrest Avenue. The male victim stated that he was walking home from the CVS and just prior to the curve on W. Hillcrest Avenue, when a black male came out of nowhere and threatened him with a black handled knife. The suspect demanded the victim’s money and cell phone.

The victim complied and he began to scream for help, when an unknown woman driving by yelled and the male suspect fled the area. The victim stated the he believed the woman started to chase the suspect in her car.

The victims described the suspect as being a B/M 20-30 years of age, 5’9″ to 5’10”, with a “skinny” but muscular build, goatee with scruffy facial hair and dark complexion.