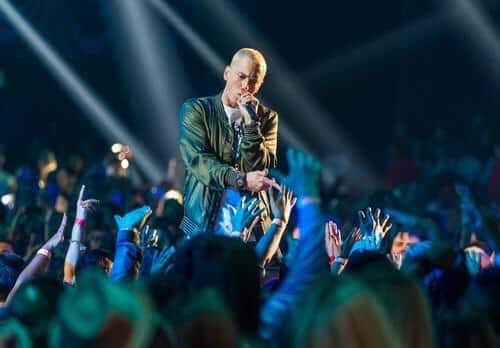 NEW YORK, NY — Eminem will be kicking off his tour in September, reportedly in New York City.

It’s been a huge year for rap fans and it’s about to be closed out on an even bigger note. For the past several weeks, fans have been gearing themselves up for Eminem to drop his ninth studio album, Revival. Despite the fact that the album itself has been clouded in mystery, Dr. Dre recently revealed the December 15th release date and shortly after, Em posted the album’s tracklist on his Instagram page. So with Em gearing up to drop off his highly anticipated album, many fans are probably wondering whether he’ll end up playing shows in support of it.

Cara Lewis is a highly reputable agent in hip hop who’s work goes back three decades. She’s represented pretty much everyone who’s everyone in hip hop and has been a driving force behind some of hip hop’s most profitable live touring shows. In a recent interview with Pollstar, she spoke on some of the acts she represents including Eminem. According to the interview, Lewis confirmed Eminem will be hitting the road next year. When asked to preview some of the upcoming tours for 2018, she said, “Eminem will be touring next year on select dates, his first U.S. performances since 2014.”

Unfortunately, that was the only amount of information she spilled during the interview. Most likely, details are still being sorted out but it’s  exciting to know that he’ll be hitting the road in 2014. Hopefully, the tour ends up being more than just “select dates” and he ends up taking Revival across North America.