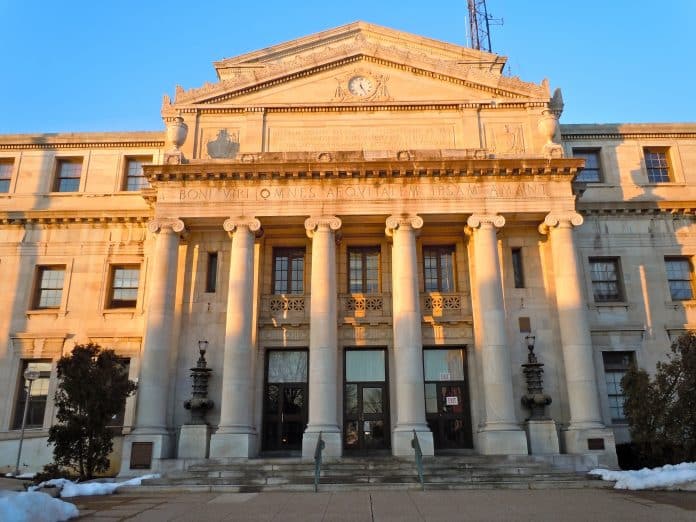 The induction ceremony included 13 district judges who were re-elected or newly elected to serve for a 6-year term.

Republican incumbent Lee Hunter secured another term following his hard-fought campaign in the 32-2-43 District covering Newtown Square and Radnor with 3,936 votes over Democratic challenger Christopher Bagnato’s 3,345 votes, according to unofficial returns with all 14 precincts reporting.

Attorney and Interboro School Board member Michael Burns was sworn in to District 32-2-42 for the seat currently held by retiring Judge Peter P. Tozer.

Recently retired Judge Nilon was also acknowledged for his 16-Years of distinguished service as a district judge and his career as a judge of the Delaware County Court of Common Pleas.

The Honorable Michael A. Burns was sworn in at 2:13 p.m. “When I first got started on his I didn’t really have a lot of people who would stick out their necks for me – my friend Nancy told me to go door-to-door everyday. We put on some music, took a shot of espresso and got to work,” Burns said, mentioning his great support from both parties. “Then you have your emotional support. I had dinner in peoples homes. I had dogs and cats crawling all over me. I had people telling me of their loved ones who lost their lives to the opioid epidemic.” Burns’ mother put the judicial robe over her son after he took the oath of office, with his father holding the Bible for him.

The Honorable Andrew Goldberg was sworn in at 2:23 p.m.

“Due to the political composition in the County, the fact that I was facing an 18-year incumbent and that I had no political experience at all; I never thought I had a chance. I guess that changed,” Goldberg said. “I am thrilled to have been elected as the district court judge for Upper Providence.”

The Honorable Diane M. Holefelder was sworn in at 2:46 p.m. serving District Court 32-2-38. Despite Judge Holdefelder being unopposed with the seat guaranteed, Court of Common Pleas Judge Linda A. Cartisano praised Holefelder for working the polls on Election Day.