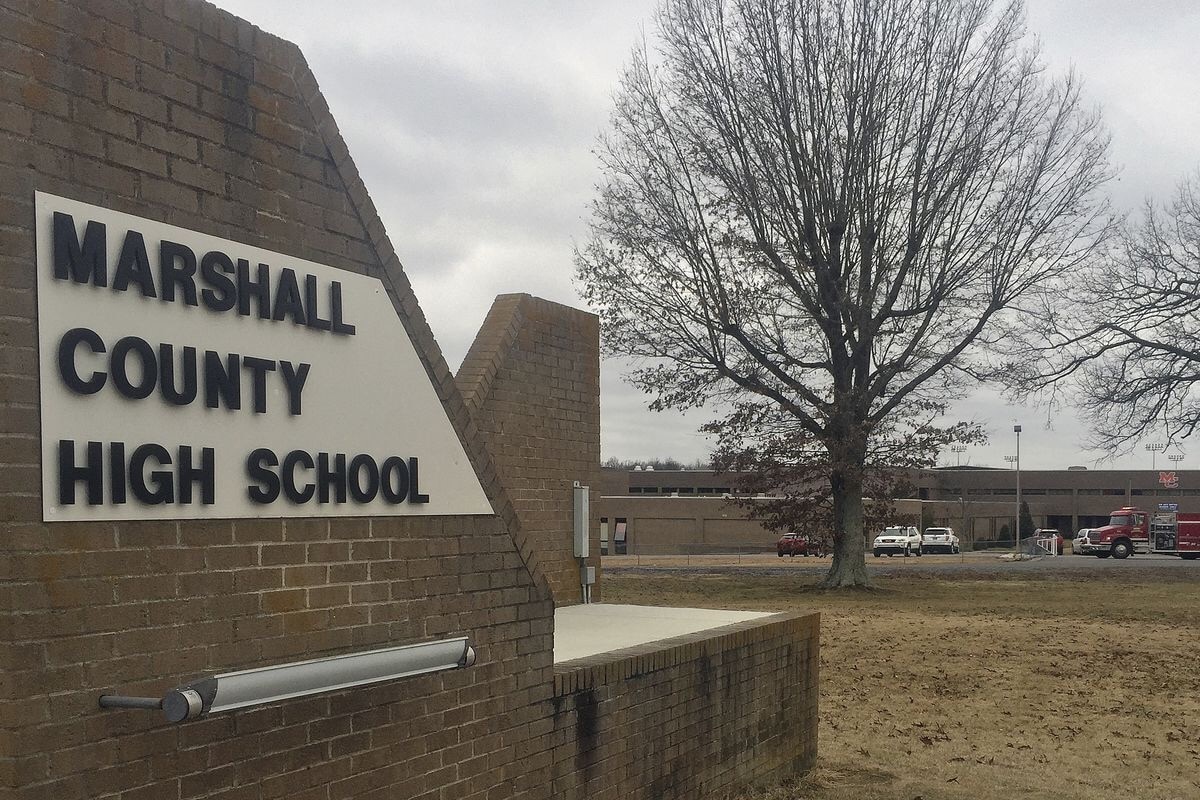 Police were seen leading a teenager away in handcuffs and said the suspect will be charged with murder. It was the nation’s first fatal school shooting of 2018.

Students ran for their lives out of Marshall County High School, jumping into cars and running down a highway, some not stopping until they reached a McDonald’s restaurant more than a mile away.

“They was running and crying and screaming,” said Mitchell Garland, who provided shelter to between 50 and 100 students inside his nearby business. “They was just kids running down the highway. They were trying to get out of there.”

A half-dozen ambulances and numerous police cars converged on the school, along with officers in black fatigues carrying assault rifles. Federal authorities responded, and Sen. Mitch McConnell sent staffers. Gov. Matt Bevin rushed from the Capitol to the scene. Parents left their cars on both sides of an adjacent road, desperately trying to find their teenagers.

Two 15-year-olds were killed. A girl died at the scene, and a boy died later at a hospital, the governor said, adding that all of the victims are believed to be students.

The shooter will be charged with murder and attempted murder, Bevin said. Police did not release his identity, nor did they describe a motive.

“This is a wound that is going to take a long time to heal. For some in this community will never fully heal,” Bevin said.

Kentucky State Police have no reason to suspect anyone else, detective Jody Cash told the Murray Ledger & Times.

The attack marked the year’s first fatal school shooting, 23 days into 2018, according to data compiled by the Gun Violence Archive, which relies on media reports and other information.

Bevin said earlier in a statement that “It is unbelievable that this would happen in a small, close-knit community like Marshall County.”

Marshall County High School is about 30 minutes from Heath High School in Paducah, Kentucky, where a 1997 mass shooting killed three and injured five. Michael Carneal, then 14, opened fire there about two years before the fatal attack at Columbine High School in Colorado, ushering in an era when mass school shootings have become much more common.

Meanwhile, in the small North Texas town of Italy, a 15-year-old girl was recovering Tuesday after police said she was shot by a 16-year-old classmate in her high school cafeteria on Monday, sending dozens of students scrambling for safety.

Tuesday’s shooting happened as students gathered in a common area just before classes began. Sixteen-year-old Lexie Waymon said she and a friend were talking about the next basketball game, makeup and eyelashes when gunshots pierced the air.

“I blacked out. I couldn’t move. I got up and I tried to run, but I fell. I heard someone hit the ground. It was so close to me,” Waymon said. “I just heard it and then I just, everything was black for a good minute. Like, I could not see anything. I just froze and did not know what to do. Then I got up and I ran.”

It was chaotic outside the school as parents and students rushed around trying to find each other, said Dusty Kornbacher, who owns a nearby floral shop. “All the parking lots were full with parents and kids hugging each other and crying and nobody really knowing what was going on,” he said.

Barry Mann said his 14-year-old son was put on a bus and taken to another school to be picked up.

“He gave me a call as soon as he run out the door and I didn’t know what was happening to him,” he told the AP. “It sounded like his heart was in his throat.”

Garland said his son, a 16-year-old sophomore, jumped into someone’s car and sped away before joining others inside his business.

“Everyone is just scared. Just terrified for their kids,” Garland said. “We’re a small town and we know a lot of the kids.”

Man Nearby Horse Betting Station Tricked Harrah’s Casino Staff, Snatched $24K in Loot and Made Off on Foot, Cops Search for Clues

A man ‘ran faster than a withdrawing crackhead who just scored’ darting past witnesses at a rate of ‘at-least 25 miles per hour’ on foot.
Read more