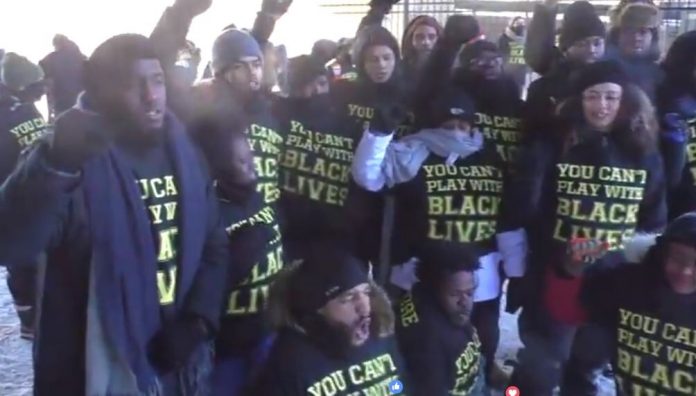 (AP/Star Tribune) Twenty activist groups and an anticipated 500 or more people plan to bring their protest against police brutality, corporate greed and racism to downtown Minneapolis before Sunday’s kickoff of the Super Bowl.

The actions began on the Metro Transit Green Line light rail line at the West Bank station near U.S. Bank Stadium, several protesters strung themselves across the tracks near the stadium wearing black hoodies with “You Can’t Play with Black Lives” emblazoned across the front.

Fire Department personnel arrived on the scene and were assessing how to move the chain of protesters and clear the tracks. Police also stood by but have yet to make any arrests.

The protest began about 2 p.m. Sunday afternoon and was carried live on the Facebook page of Unicorn Riot, an alternative news website that has been on the scene of many urban protests in the Twin Cities for the past couple of years.

The multiracial activists were shown chanting and voicing their grievances through a bullhorn about economic and social justice challenges faced by people of color, including decrying the millions of dollars spent on the stadium and the effort to bring the Super Bowl to Minneapolis.

One woman stepped forward and read a list of demands that included freezing police hiring and have law enforcement return military weaponry. They also shouted the names of Jamar Clark, Philando Castile and others fatally shot by police in recent years.

“Whose streets? Our streets,” one chant bellowed. That was followed by “Shut it down!” Police arrived at the scene, where protesters stood on both the eastbound and westbound tracks. There appear not to have been any arrests as the game’s start was less than 2½ hours away.

“We’re not worried about those billions of dollars they spent on the Super Bowl, we want them to invest in our communities,” Minneapolis NAACP President Jason Sole told Unicorn Riot. “We’re here to shut it down.”

Metro Transit spokesman Howie Padilla confirmed there was “some kind of demonstration going on,” but said was too early to say whether train service was disrupted.

Marchers and a “tailgate motorcade” were expected to meet at 3 p.m. at Chicago Avenue S. and E. Franklin Avenue, then march toward the stadium to meet up with “Take a Knee” protesters at 8th Street and Chicago.

More than 500 people said on the Super Bowl Anti-Racist Anti-Corporate Rally Facebook page that they planned to attend.

“The Minneapolis Police Department has a long history of respecting people’s 1st Amendment rights while balancing the needs for public safety,” police said in a statement. “Any response to demonstrations will be done to ensure these priorities remain consistent. MPD expects our approach, and our successful track record regarding peaceful and lawful demonstrations, to remain the same during Super Bowl week.”

Rally organizers included everyone from AFSCME 2822 and 3800 to the American Indian Movement and Anti-War Committee to Women Against Military Madness.

“During this year’s football season, players, and in some cases entire teams, have spoken out against racism, police brutality, and white supremacist violence,” the rally’s Facebook page said. “While Trump and the NFL threatened, silenced, and blacklisted players for speaking out, we support Colin Kaepernick, Michael Bennett, Marshawn Lynch, and all athletes — from the NFL to local high schools — who’ve used their voices to demand justice.

“Super Bowl 52 is coming to a community that has taken to the streets many times against local police killings. From Jamar Clark and Justine Damond, to Philando Castile and Phil Quinn, justice has been denied for these and many other lives stolen by Minneapolis and St. Paul cops,” it said.

“Our communities will dish out millions to these same police departments to provide “security” for the Super Bowl, while nothing has been done to address police violence.”