Pennsylvania State Police responded to a two-vehicle accident just after 8 p.m. on Friday, February 2nd at the intersection of Concord Road and Thornton Roads in Concord Township. When police arrived, they quickly found out that one person involved in the accident was State Representative Margo Davidson from Lansdowne, Pennsylvania.

Pennsylvania State Police told YC that Margo Davidson complained of neck pain and was transported to Riddle Memorial Hospital and the second driver was taken to Crozer-Chester Hospital with injuries to his neck and left arm.

Police told us that Davidson was trying to pull out of a driveway onto Concord Road and struck a vehicle already in the roadway.

Pennsylvania State Police also told us that Margo Davidson was cited for driving with a suspended license. However, police wouldn’t specify how long the license has been suspended for, but if she continues to perform her duties it will likely be illegal; given she cannot drive to Harrisburg to take part in any legislative votes or duties.

What does this mean for locals? Don’t plan on having a voice in Harrisburg until the State Rep. is eligible or decides to work on getting her license back.

PennDOT is known for taking a number of months to reinstate licenses or have restoration hearings, so this will potentially cost the tax payers thousands of dollars.

Oddly, Davidson might be taking her chances on the road. Immediately following the crash, she was seen in Harrisburg with a new hairdo and no signs of any neck injury.

For instance, if the restoration takes the average 60-day period and Davidson doesn’t break the law to make her way to Harrisburg, it’ll cost tax payers $14,413.00 plus an additional $10,740.00 in daily per diem budget, totaling $25,153.00. If she does break the law, then it’ll only cost tax payers money if she is arrested for continuing to drive on a suspended license.

This isn’t the first Davidson courtroom-rodeo, the family has an extensive criminal and civil history dating back nearly a decade.

That didn’t stop her from partying. Davidson was out drinking with friends this weekend ‘celebrating’ on social media. 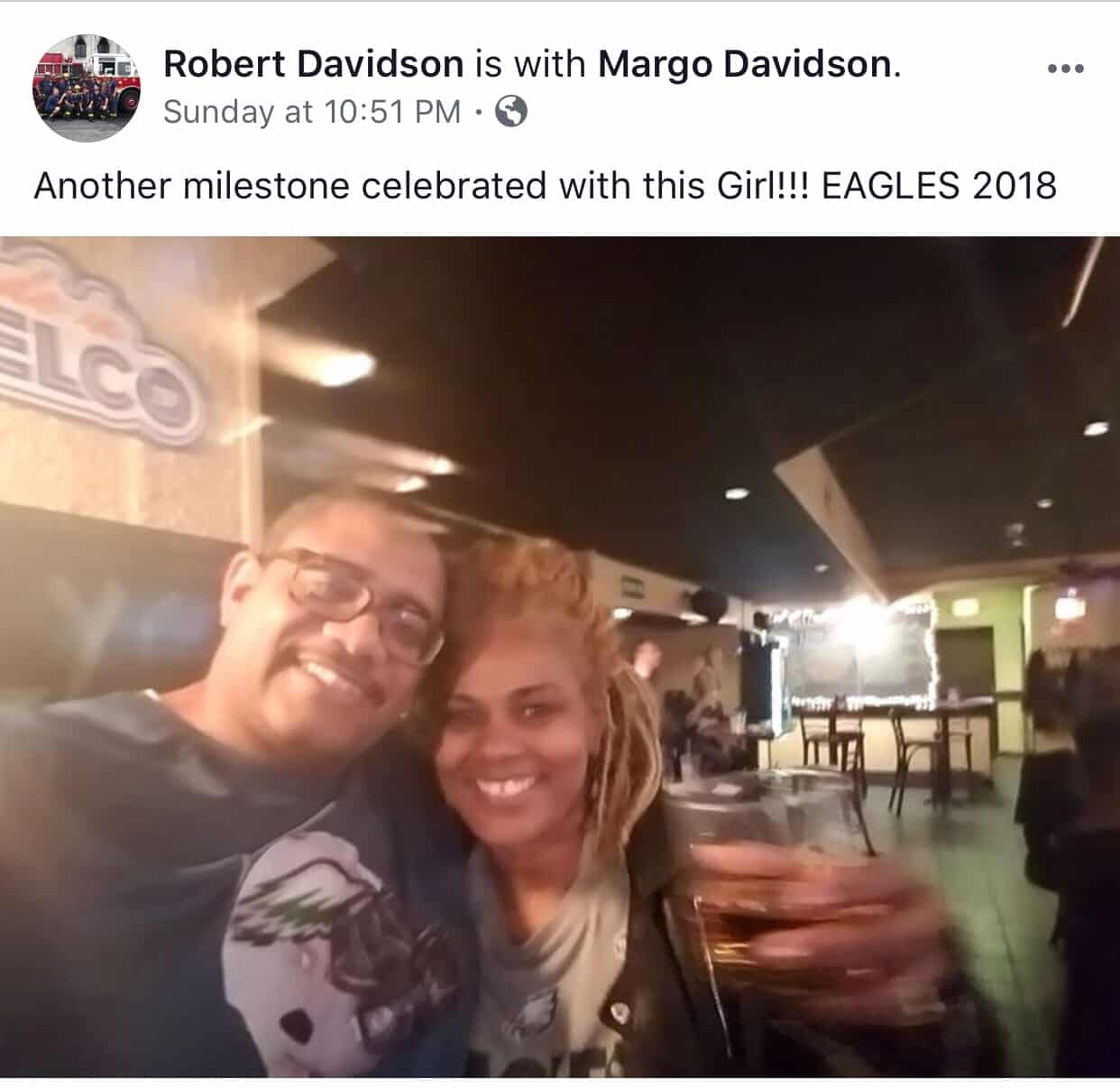 If found guilty, Davidson will cost tax payers over $100k as the mandatory minimum is an additional suspension of one-year. She will likely watch the house vote from her home, unless she finds a ride to Harrisburg.

Margo’s son, Robert Davidson, had a few previous encounters with the legal system in Delaware County – after being arrested for possession of marijuana, public drunkenness and disorderly conduct in 2015.

More recently, Robert Davidson was charged with numerous counts of possession with intent to deliver after police in Upper Darby witnessed a drug buy and made chase just minutes from his mother’s office. While incarcerated, Davidson made an extremely incriminating phone call to an unknown person, asking for them to go and clean out the apartment followed by a slew of additional charges when police executed a search warrant on his apartment. Police called the apartment a “drug warehouse” after finding narcotics, weapons, money and paraphernalia.

His slightly older brother was arrested in 2012 for felony criminal trespassing, two counts of indecent exposure, two counts of simple assault and four counts of harassment followed by three felonies of theft of a motor vehicle, theft by unlawful taking, receiving stolen property and two misdemeanor counts of unauthorized use of a motor vehicle and resisting arrest. His mother, State Rep. Margo Davidson was also brought to court after a bizarre case regarding falsifying signatures on her nomination petitions in 2015 and being evicted from her campaign office due to unpaid rent. Additionally, the Davidson’s owed the City of Philadelphia nearly $20,000.00 in unpaid taxes, bills and fines.

© 2018 YC News Network. All rights reserved. This material may not be published, broadcast, rewritten or redistributed. Learn more about our Privacy Policy and Terms of Use.