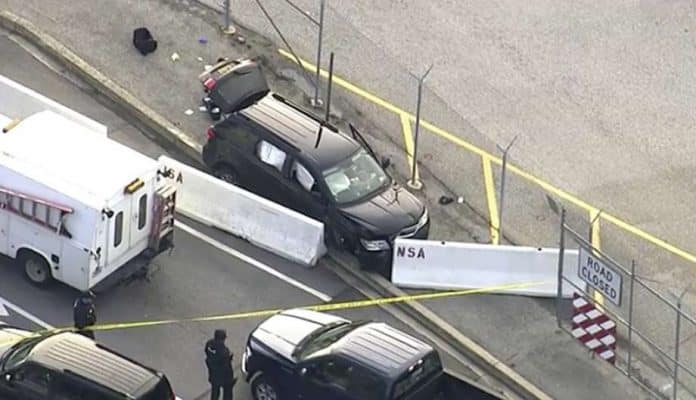 FORT MEADE, Maryland (AP) — Police responded to a shooting Wednesday outside the National Security Agency campus at Fort Meade, where authorities surrounded a handcuffed man after a black SUV ran into a barrier.

Fort Meade garrison spokeswoman Cheryl Phillips confirmed by phone that one person was injured in the shooting outside the base and was taken to hospital.

“NSA police and local law enforcement are addressing an incident that took place this morning at one of NSA’s security vehicle entry gates. The situation is under control and there’s no ongoing security or safety threat,” an NSA statement said.

President Donald Trump has been “briefed on the shooting at Ft. Meade,” and the White House offers thoughts and prayers with those who have been affected, spokeswoman Lindsay Walters said.

The FBI said it was sending people to the scene.

An image taken from a WRC-TV helicopter shows the police and fire department response outside one of the facility’s secure vehicle entry gates. WRC said bullet holes could be seen in the vehicle’s front window, and several air bags were deployed. Blood-stained material could be seen on the ground.

Despite prominent highway signs, drivers occasionally take the wrong exit and end up at the tightly secured gates. Most motorists then carefully follow the orders of heavily armed federal officers and turn around without getting into more trouble.

But in early 2015, two people were shot at by NSA police when they disobeyed orders outside the heavily secured campus. One driver died at the scene after NSA police opened fire on a stolen sports utility vehicle. Authorities later said they had stolen a car from a man who picked them up for a party at a motel.