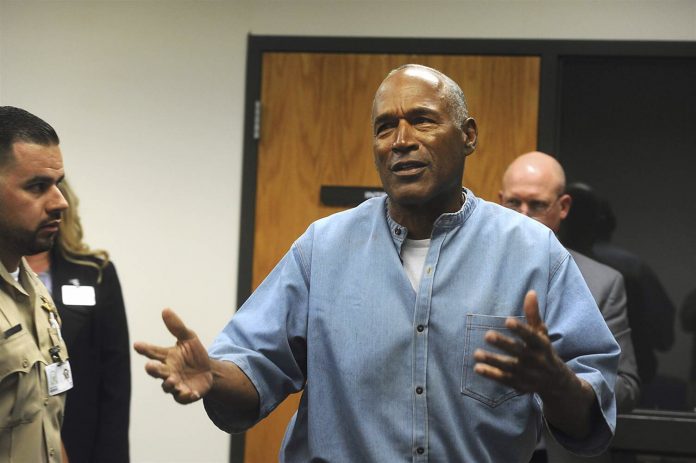 (TMZ) After 24 years any mystery surrounding the murders of Nicole Brown Simpson and Ron Goldman is over … because O.J. Simpson confessed.
Fox aired “OJ Simpson: The Lost Confession?” Sunday night and Simpson walked author Judith Regan through what happened on June 12, 1994.  He starts out adamant — he was just talking hypothetically, which is weird, because if he didn’t do it what’s his basis for creating the hypothetical.
Simpson starts by talking about his “friend Charlie” … whom he says for some reason went to Nicole’s to snoop around.  He says Charlie came over to Simpson’s home, told him what was going on and Simpson responded, “Whatever is going on it’s gotta stop!”  Unfortunately, Regan didn’t ask Simpson what Charlie said was going on.
Simpson says, hypothetically, he and Charlie drove to Nicole’s with a cap, gloves and a knife under the seat and parked in the alley.   Simpson says he walked around the property and Ron Goldman appeared, saying he was at the restaurant where Nicole dined and was returning the sunglasses her mom left behind.
Simpson says he got angry at Ron — presumably thinking he was there on a date with Nicole — and started screaming at him.  Nicole came out, things got heated, she told OJ to get the f*** off her property, and then he says Nicole fell and hurt herself.  In fact, he swung the knife at her and hit her in the face with the blunt end.
Now the confession … Simpson loses the hypo and starts talking very clearly — undeniably — in first person, saying Ron got in a karate stance, OJ responded, “You think you can kick my ass?” and then he says, “I remember I grabbed the knife.”   OJ eventually checks himself when he realizes he’s talking in first person and actually starts laughing … seriously.  Check out the video for the rest.
By the way … he also acknowledges dropping a glove on the property, which totally blows up the theory cops planted a glove.
Case closed.