“You think they [NY Magazine] edited out references to your genital area?” Tom Mesereau asked Janice Baker-Kinney minutes after the second day of cross-examination began.

Janice Baker-Kinney, one of 35 women who took to the cover of New York Magazine with the help of attorney Gloria Allred, told jurors Thursday that they either altered her statement, condensed it, edited parts out or censored it — telling Mesereau, Cosby’s lead attorney, to contact them about it if he had questions about her inconsistencies.

Baker-Kinney replied, “I don’t know. They probably have my complete statement if you’d like to ask them and we can see what they edited out.”

“That would be something you need to ask the editors at New York Magazine,” but retracted that statement quickly, stating, “I did say yesterday that I incorrectly stated or signed [to my deposition to the police] that my statement wasn’t completely accurate in New York Magazine.” 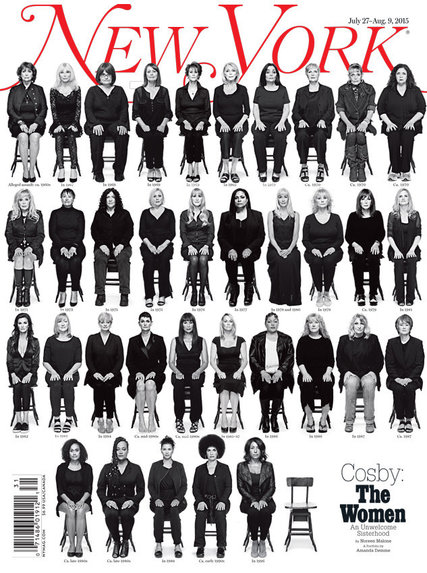 New York magazine may have ended the relative anonymity of many Cosby accusers for good after a July 2015 edition, that instantly went viral. For a cover story three years ago, New York interviewed and photographed 35 of Cosby’s alleged victims, supplementing the story with video interviews with six.

“When you and Ms. [Gloria] Allred issued a statement, your words had expanded to ‘he touched me on my belly and my general area,’ correct?”

Janice Baker-Kinney, insisting her statement did not change, replied, “My statement hadn’t expanded. I just gave New York Magazine a condensed version.” That statement changed during re-cross examination, when Baker-Kinney told Montgomery County District Attorney Kevin Steele that NY Magazine altered her quote or printed an inaccurate quote on the cover of their magazine.

If Baker-Kinney’s allegation is true, it would open the door to question the editorial department responsible for releasing the highly-publicized edition of the magazine and raise concerns on what the other 34 women truly told the magazine in 2015, some of which who are clients of attorney Gloria Allred.

We reached out to New York Magazine for a statement on Janice Baker-Kinney’s allegation that her story was altered.