• Khanefah Boozer was arrested in 2011 for allegedly firing a gun at a Philadelphia Police Officer • Boozer was held in prison after being unable to post $500k bail • Boozer claims he told police his friend fired the gun in 2011 but they never investigated the claim • Boozer was acquitted of all charges • Boozer was awarded $10,000,000 by a Philadelphia jury in a civil suit against the department 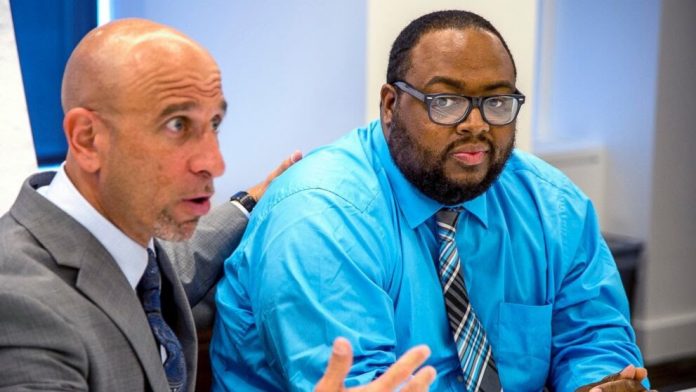 PHILADELPHIA (AP) — A Philadelphia man locked up for more than three years based on a police officer’s false testimony has been awarded $10 million.

The jury’s verdict Thursday was handed down in the case of Khanefah Boozer, a 33-year-old man who languished in jail while he awaited trial for allegedly firing a gun at Officer Ryan Waltman in 2011. He was unable to post the $500,000 bail.

When he finally went to trial in 2014, Waltman testified that Boozer shot at police, and another officer backed up the testimony.

Another man testified that he, not Boozer, fired the gun in the air, not at the officer. A jury acquitted Boozer of all the charges.

Boozer then filed a civil suit, in which he says he told police that his friend, not him, fired the gun on the very night of his arrest, but it was never investigated.

“The officers were intent on arresting and charging someone for the shooting,” according to a filing from Boozer’s lawyers in his civil case.

Boozer’s mother and sister passed away while he was in jail.

Lawyers for the city contended that Waltman made an honest mistake in accusing Boozer of firing a gun. A spokesman for Mayor Jim Kenney said the city is reviewing the verdict and may appeal.

Waltman, a 10-year veteran of the force, remains employed with the police department with a salary of about $75,000, the Philadelphia Inquirer reported.

Boozer’s attorney, Robert Levant, said at a news conference the verdict was “a message that should be heard loud and clear throughout the city of Philadelphia, that this will not be tolerated.”

Boozer wants people not to focus on his jury award but instead keep fighting for anyone who was wrongfully arrested and remains behind bars.

“I’m just happy that it’s all over,” Boozer told KYW-TV.