• Update: 2 people reported dead; 45 hurt • The school bus was carrying fifth graders on a field trip • The school bus had markings for the Paramus School District • The National Transportation Safety Board is gathering information on the crash • Morristown Medical Center spokeswoman could not say how many patients were children 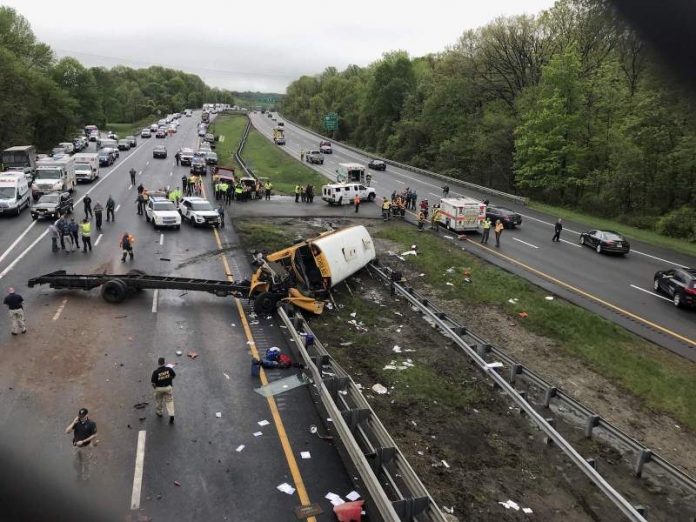 MOUNT OLIVE, N.J. (AP) — A school bus and dump truck collided on a New Jersey highway Thursday, ripping apart the bus, knocking it on its side and injuring multiple people, according to police.

A red dump truck with a mangled front end was parked along the highway nearby, about 50 miles (80 kilometers) west of New York.

The school bus had markings for the Paramus School District. A fifth-grade class trip from the district was scheduled for Waterloo Village, a historic site about 5 miles away from the crash scene. A school district official said its superintendent was preparing a statement.

State police said that an unknown number of children were on the bus, but they didn’t know how serious the injuries are. Hackettstown Police Sgt. Darren Tynan told The Record that multiple people were taken to a hospital.

A sign outside of the East Brook Middle School in Paramus, about 50 miles (80 kilometers) from the crash site, informed people to go to the auditorium for updates on the accident.

Gisela Aultmon, transportation coordinator for the district, said she was busy fielding calls from parents and could not answer questions from reporters.

The National Transportation Safety Board is gathering information on the crash, a spokesman said.

At least two canine units were searching the woods along the roadside Thursday afternoon, but it wasn’t clear why.

Morristown Medical Center spokeswoman Elaine Andrecovich said they have received some people from the accident, but she did not have a number available and could not say how many were children.

About 10 victims were taken to St. Clare’s Dover Hospital and St. Clare’s Denville Hospital, according to Communications Director Patty Montgomery. She said they were being evaluated and treated, but she did not have ages or conditions.

St. Joseph’s Health public relations manager Pam Garretson said two children were being evaluated in the emergency room. She did not know their conditions or ages.

Associated Press writers Shawn Marsh, in Trenton, and Jeff McMillan, in Philadelphia, contributed to this story.