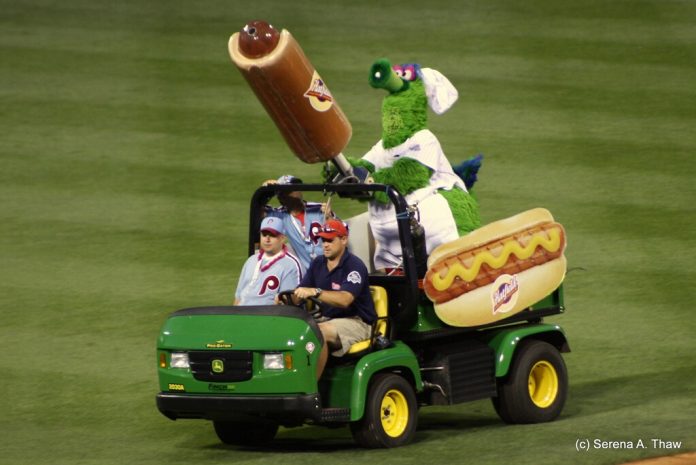 It was all fun and games until a flying wiener left a Phillies fan with a black eye when the Phillie Phanatic shot her in the face with a hot dog.

Kathy McVay was watching the team play against the St. Louis Cardinals Monday when the hotdog was shot out of a cannon — striking her in the eye, leaving her wounded.

“All of a sudden I looked up and here comes this hot dog,” she told NBC. “Since I can’t lift my shoulder…I couldn’t catch it or get it out of the way that fast.”

McVay and her friends left the game and went to Einstein Hospital, where doctors took X-rays and she underwent a CAT scan. Despite the black eye, she looks forward to the next game.

Luckily for McVay, nothing was broken. She does have a black eye and a surreal moment she’ll never forget.

“At least it’s funny,” McVay said. “It’s a story I can tell people. My only thing is just to warn people just to be careful.”

The Phillies reached out to McVay Tuesday to apologize. They also offered her free tickets to a future game. McVay says the incident hasn’t scared her off from going.

“You would think you would get hit by a baseball,” the Plymouth Meeting woman told NBC10. “Instead of a flying hot dog.”

A Phillies spokesperson told reporters the incident was the first they’ve ever heard of a fan being injured by a hot dog.