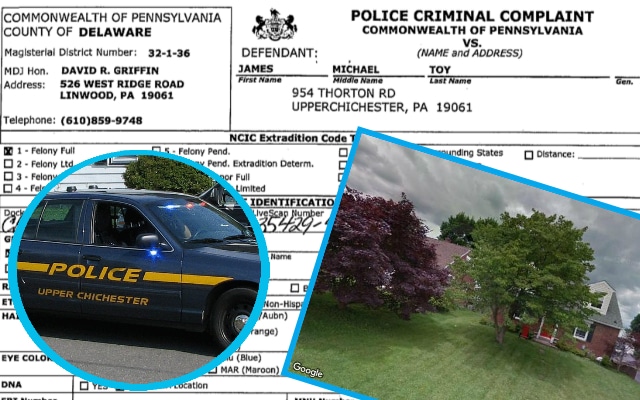 A Delaware County man from Upper Chichester is behind bars today after repeatedly stabbing a man in the face and lunging at police officers Monday morning, prompting police to open fire striking the perpetrator on his hand after he refused to drop the weapon, police tell yc.news.

The incident unfolded early Monday morning just before 3:30 a.m. when three Upper Chichester Police Officers were dispatched to a residence on the 900 block of Thorton Road in Upper Chichester for a victim who had been stabbed while sleeping on the couch.

When police arrived, the madman brandished a large knife and they ordered him to drop the weapon. The culprit ignored cops and lunged towards them prompting police to discharge their weapons, striking him in his hand.

“All I heard was: ‘Drop your weapon! He has a knife! Drop the weapon!’ followed by bang bang and he got down screamin’ ‘[My] hand! Y’all done shot my hand!‘” a neighbor tells yc.news.

Detectives from the Delaware County Criminal Investigation Division responded to the scene just before 4:30 a.m. to assist in the investigation of a stabbing and police involved shooting.

County detectives conducted interviews of the victim who was stabbed and a witness who was home at the time of the stabbing.

The frightened victim stated that he was sleeping on the couch and woke up to find James Toy on top of him. Toy began choke the victim and as they started to wrestle, the victim screamed for help.

Toy stabbed the victim in the face with a knife. Toy then put his hand in the victim’s mouth and said, “Shut up, I’m going to kill you.” During the altercation the victim sustained a stab wound to the left side of his face, cheek and left hand. The victim was able to throw the crazed man off of him and escape through the front door.

The victim then saw Toy slithering toward the police outside with a knife in his hand and heard the police telling Toy to freeze while repeatedly directing Toy to drop the knife. Police officers then discharged their weapons.

“James Michael Toy is a dangerous, violent individual who choked and stabbed the victim in the middle of the night in the sanctity of his own home. The defendant then advanced on officers, armed with a knife, and failed to follow police orders,” Delaware County District Attorney Katayoun M. Copeland told yc.news. “In this case, if convicted, Mr. Toy faces a lengthy prison sentence. I would like to commend the Upper Chichester Police Officers who responded that evening to an extremely dangerous situation, and CID Detectives Robert Lythgoe, Edmond J. Pisani, Vincent Ficchi and Thomas Scarpato for their investigative efforts which led to the arrest.”