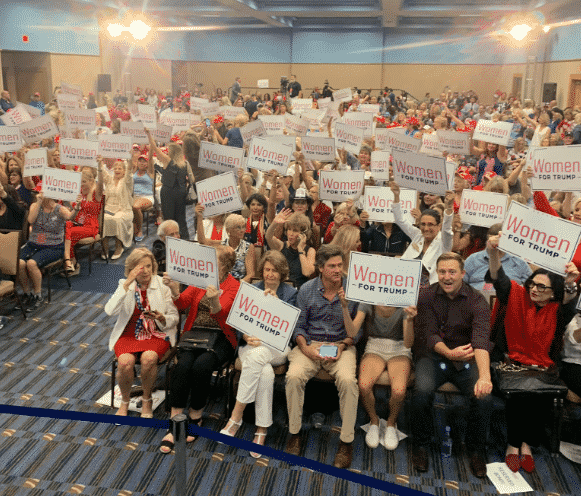 Timing for the rally was purposeful, as it commemorated the 99th anniversary of the 19th amendment in 1920, which granted women the right to vote.

The event included a presentation by the Trump Victory Leadership Initiative (TVLI) which urged attendees to register, mobilize volunteers, and engage voters to re-elect President Trump in 2020. However this invigorated crowd needed minimal encouragement, as evidenced by the electrified atmosphere and rousing audience responses.

The highlight of the event was when President Trump called in to the gathering.

“I’m so honored because I love Tampa,” Trump told the cheering crowd.

“We’re doing great with women despite the fake news.” The crowd unequivocally concurred with Trump’s sentiments.

Trump continued to compliment the city, show a keen sense of humor and convey his appreciation for the strong support. “Love Tampa. Love everybody in the room and I’m with you all the way,” the President said. “We’re going to have a great race. I think it’s going to be even easier than the last time but let’s pretend it’s even tougher so we work harder.”

By comparison, Sen. Bernie Sanders joined Andrew Gillum last October for a rally at the University of South Florida in Tampa that drew only 700 people. Let that sink in, Kellyanne Conway & Pam Bondi drew more people at a Trump women’s rally (with Trump participating via phone) than Sanders/Gillum attending in person, in the same city’s all gender event.