9/11 Hijackers DID NOT Get 72 Virgins in Hell, Experts Confirm
9 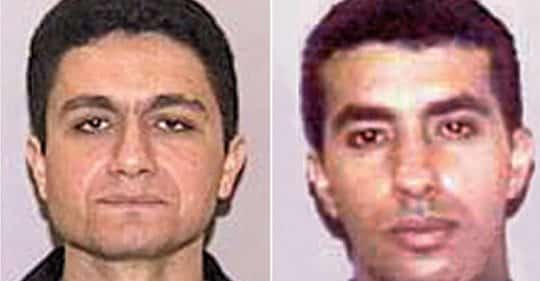 The bloodthirsty terrorist-hijackers who carried out the Sept. 11 attacks on the World Trade Center and Pentagon did not receive 72 virgins following their suicide mission, experts have confirmed. The revelation comes on the 18th anniversary of the attacks led by coward Osama bin Laden, who watched the attacks unfold from beneath a rock in the Middle East, nearby lizards and fellow terrorist tirades.

According to expert sources, the 19 eternally damned terrorists have struggled to understand why they have been subjected to soul-withering, infernal torture ever since their Sept. 11 arrival.

“The terrorists believed they would be rewarded after death,” said former NYPD Anti-Terrorism Unit Officer Sean McHill. “It doesn’t appear that anyone received a single virgin – despite being promised 72. The cowards would be lucky to keep their genitals, let alone be granted a ton of virgins.”

In August, 2001, the American television channel CBS aired an interview with a Hamas activist Muhammad Abu Wardeh, who recruited terrorists for suicide bombings in Israel. Abu Wardeh was quoted as saying: “I described to him how God would compensate the martyr for sacrificing his life for his land. If you become a martyr, God will give you 70 virgins, 70 wives and everlasting happiness.” Wardeh was in fact shortchanging his recruits since the rewards in Paradise for martyrs was 72 virgins. But I am running ahead of things.

Since September 11, news stories have repeated the story of suicide bombers and their heavenly rewards, and equally Muslim scholars and Western apologists of Islam have repeated that suicide is forbidden in Islam. Suicide (qatlu nafsi-hi) is not referred to in the Koran but is indeed forbidden in the Traditions (Hadith in Arabic), which are the collected sayings and doings attributed to the Prophet and traced back to him through a series of putatively trustworthy witnesses. They include what was done in his presence that he did not forbid, and even the authoritative sayings and doings of his companions.

But the Hamas spokesman correctly uses the word martyr (shahid) and not suicide bomber, since those who blow themselves up almost daily in Israel and those who died on September 11 were dying in the noblest of all causes, Jihad, which is an incumbent religious duty, established in the Koran and in the Traditions as a divine institution, and enjoined for the purpose of advancing Islam. While suicide is forbidden, martyrdom is everywhere praised, welcomed, and urged: “By the Being in Whose Hand is my life, I love that I should be killed in the way of Allah; then I should be brought back to life and be killed again in His way…”; “The Prophet said, ‘Nobody who enters Paradise will ever like to return to this world even if he were offered everything, except the martyr who will desire to return to this world and be killed 10 times for the sake of the great honour that has been bestowed upon him’.” [Sahih Muslim, chapters 781, 782, The Merit of Jihad and the Merit of Martyrdom.]

What of the rewards in paradise? The Islamic paradise is described in great sensual detail in the Koran and the Traditions; for instance, Koran sura 56 verses 12 -40 ; sura 55 verses 54-56 ; sura 76 verses 12-22. I shall quote the celebrated Penguin translation by NJ Dawood of sura 56 verses 12- 39: “They shall recline on jewelled couches face to face, and there shall wait on them immortal youths with bowls and ewers and a cup of purest wine (that will neither pain their heads nor take away their reason); with fruits of their own choice and flesh of fowls that they relish. And theirs shall be the dark-eyed houris, chaste as hidden pearls: a guerdon for their deeds… We created the houris and made them virgins, loving companions for those on the right hand…”

One should note that most translations, even those by Muslims themselves such as A Yusuf Ali, and the British Muslim Marmaduke Pickthall, translate the Arabic (plural) word Abkarun as virgins, as do well-known lexicons such the one by John Penrice. I emphasise this fact since many pudic and embarrassed Muslims claim there has been a mistranslation, that “virgins” should be replaced by “angels”. In sura 55 verses 72-74, Dawood translates the Arabic word ” hur ” as “virgins”, and the context makes clear that virgin is the appropriate translation: “Dark-eyed virgins sheltered in their tents (which of your Lord’s blessings would you deny?) whom neither man nor jinnee will have touched before.” The word hur occurs four times in the Koran and is usually translated as a “maiden with dark eyes”.

Two points need to be noted. First, there is no mention anywhere in the Koran of the actual number of virgins available in paradise, and second, the dark-eyed damsels are available for all Muslims, not just martyrs. It is in the Islamic Traditions that we find the 72 virgins in heaven specified: in a Hadith (Islamic Tradition) collected by Al-Tirmidhi (died 892 CE [common era*]) in the Book of Sunan (volume IV, chapters on The Features of Paradise as described by the Messenger of Allah [Prophet Muhammad], chapter 21, About the Smallest Reward for the People of Paradise, (Hadith 2687). The same hadith is also quoted by Ibn Kathir (died 1373 CE ) in his Koranic commentary (Tafsir) of Surah Al-Rahman (55), verse 72: “The Prophet Muhammad was heard saying: ‘The smallest reward for the people of paradise is an abode where there are 80,000 servants and 72 wives, over which stands a dome decorated with pearls, aquamarine, and ruby, as wide as the distance from Al-Jabiyyah [a Damascus suburb] to Sana’a [Yemen]’.”

Modern apologists of Islam try to downplay the evident materialism and sexual implications of such descriptions, but, as the Encyclopaedia of Islam says, even orthodox Muslim theologians such as al Ghazali (died 1111 CE) and Al-Ash’ari (died 935 CE) have “admitted sensual pleasures into paradise”. The sensual pleasures are graphically elaborated by Al-Suyuti (died 1505 ), Koranic commentator and polymath. He wrote: “Each time we sleep with a houri we find her virgin. Besides, the penis of the Elected never softens. The erection is eternal; the sensation that you feel each time you make love is utterly delicious and out of this world and were you to experience it in this world you would faint. Each chosen one [ie Muslim] will marry seventy [sic] houris, besides the women he married on earth, and all will have appetising vaginas.”

One of the reasons Nietzsche hated Christianity was that it “made something unclean out of sexuality”, whereas Islam, many would argue, was sex-positive. One cannot imagine any of the Church fathers writing ecstatically of heavenly sex as al-Suyuti did, with the possible exception of St Augustine before his conversion. But surely to call Islam sex-positive is to insult all Muslim women, for sex is seen entirely from the male point of view; women’s sexuality is admitted but seen as something to be feared, repressed, and a work of the devil.

Scholars have long pointed out that these images are clearly drawn pictures and must have been inspired by the art of painting. Muhammad, or whoever is responsible for the descriptions, may well have seen Christian miniatures or mosaics representing the gardens of paradise and has interpreted the figures of angels rather literally as those of young men and young women. A further textual influence on the imagery found in the Koran is the work of Ephrem the Syrian [306-373 CE], Hymns on Paradise, written in Syriac, an Aramaic dialect and the language of Eastern Christianity, and a Semitic language closely related to Hebrew and Arabic.

This naturally leads to the most fascinating book ever written on the language of the Koran, and if proved to be correct in its main thesis, probably the most important book ever written on the Koran. Christoph Luxenberg’s book, Die Syro-Aramaische Lesart des Koran, available only in German, came out just over a year ago, but has already had an enthusiastic reception, particularly among those scholars with a knowledge of several Semitic languages at Princeton, Yale, Berlin, Potsdam, Erlangen, Aix-en-Provence, and the Oriental Institute in Beirut.

Luxenberg tries to show that many obscurities of the Koran disappear if we read certain words as being Syriac and not Arabic. We cannot go into the technical details of his methodology but it allows Luxenberg, to the probable horror of all Muslim males dreaming of sexual bliss in the Muslim hereafter, to conjure away the wide-eyed houris promised to the faithful in suras XLIV.54; LII.20, LV.72, and LVI.22. Luxenberg ‘s new analysis, leaning on the Hymns of Ephrem the Syrian, yields “white raisins” of “crystal clarity” rather than doe-eyed, and ever willing virgins – the houris. Luxenberg claims that the context makes it clear that it is food and drink that is being offerred, and not unsullied maidens or houris.

In Syriac, the word hur is a feminine plural adjective meaning white, with the word “raisin” understood implicitly. Similarly, the immortal, pearl-like ephebes or youths of suras such as LXXVI.19 are really a misreading of a Syriac expression meaning chilled raisins (or drinks) that the just will have the pleasure of tasting in contrast to the boiling drinks promised the unfaithful and damned.

As Luxenberg’s work has only recently been published we must await its scholarly assessment before we can pass any judgements. But if his analysis is correct then suicide bombers, or rather prospective martyrs, would do well to abandon their culture of death, and instead concentrate on getting laid 72 times in this world, unless of course they would really prefer chilled or white raisins, according to their taste, in the next.

Ibn Warraq of The Guardian Contributed to This Report.