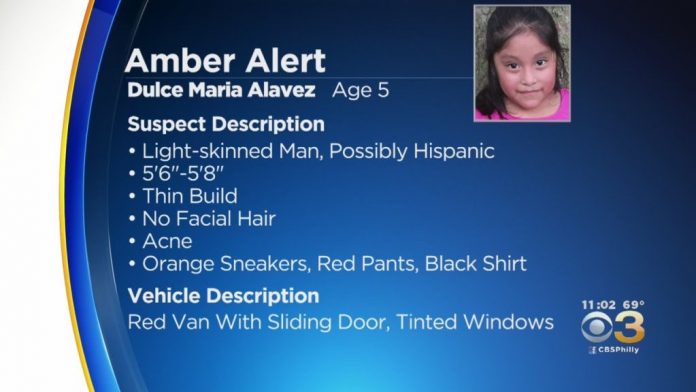 BRIDGETON, N.J. (CBS) — Officials have issued an amber alert for missing 5-year-old Dulce Maria Alavez, who was last seen at the Bridgeton City Park Monday afternoon. Dulce was last seen wearing a yellow shirt with a koala bear on the front, black and white pants and white sandals.

Police say they are searching for a light-skinned, possibly Hispanic, man who is approximately 5-foot-6 to 5-foot-8 in height with a thin build. Police say the man has no facial hair and has acne on his face.

The suspect was wearing orange sneakers, red pants and a black shirt.

Police say it was around 4:20 p.m. Monday when the suspect took Dulce while she was playing at the park.

Police say about 45 minutes before calling police, Dulce’s mother, Noema Perez, took Dulce and her 3-year-old brother to a local custard stand for ice cream and then to the park to play. The two little ones ran off to the playground while Perez remained at her car with an 8-year-old relative.

She says a short time later, she went to check on the kids and Dulce had disappeared.

“When we got down, we found my son crying. His ice cream was on the floor. We told him ‘where’s your sister at?’ and he just pointed behind those buildings over there,” Perez said.

Police say the suspect led Dulce from the playground to a red van with a sliding door and tinted windows. Dulce was seated in the back seat by the man, who drove.

For two days and into two nights, officials and the community searched the woods and brush within the park, concerned that she was out there alone, scared or possibly hurt.