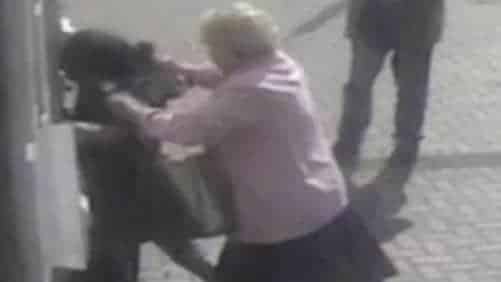 LEANING on her walking stick to withdraw her pension money, and dressed in a smart pink jacket, 81-year-old Doreen Jones evidently looked like a soft target.

As twice-widowed Mrs Jones waited for her cash, a woman tapped her on the shoulder and pointed to her mouth in an apparent begging attempt.

Suddenly, the woman lunged at the pensioner and made a grab for her bank card.

But as demonstrated by these remarkable images from CCTV footage, Mrs Jones was made of sterner stuff. Grabbing her would-be mugger by the collar as she tried to use the card, the retired car factory welder dragged her away from the cash machine and hurled her across the pavement.

‘She wasn’t expecting me, I tell you,’ she said yesterday. ‘She was expecting somebody more vulnerable, and they picked the wrong one when they picked Doreen.’

As police released the shocking clip in an attempt to trace the would-be thief, Mrs Jones revealed where she learnt to look after herself.

Asked at her West Midlands home whether she had any military training, the pensioner burst out laughing. ‘Don’t be silly – I was brought up in the War,’ she replied. ‘I learnt how to fight in the air raid shelters – the children used to have mock fights.’

Mrs Jones was targeted in Rowley Regis, West Midlands, but managed to overpower the much younger mugger. ‘I thought, “No, you’re not having my money, I’ve worked hard for that,”’ she told BBC Crimewatch Roadshow.

‘I got her hair as well as her collar and she started screaming,’ she said. ‘I don’t know why she was screaming. I was the one who should have been screaming… She wasn’t expecting me, I tell you.’

The woman ran off empty-handed, but Mrs Jones collapsed in the high street and an ambulance was called. Since the attack on May 20, she has suffered heart problems and gets anxious when visiting the area. She added: ‘They just think of what they are going to get.

‘They don’t think about what it does to the person after.’

Mrs Jones has lived alone since her second husband, Roy, died of cancer 13 years ago. Her first husband John died of a heart attack. West Midlands Police are trying to trace the mugger – who is believed to have been in her 20s and pregnant at the time of the attack.

Investigator Peter Rawlins said: ‘If you see her acting suspiciously by a cash machine then contact us. Doreen is a tough lady and this suspect picked the wrong pensioner, but she has had heart problems since the incident.’

By James Tozer For The Daily Mail.