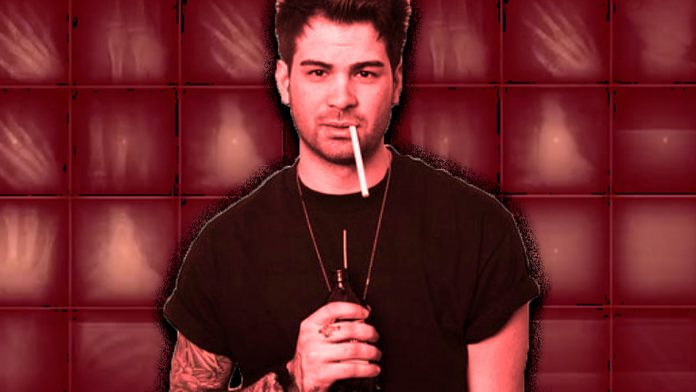 Imagine being in your most vulnerable state — completely naked. You take private photos of yourself, with no intention to share them unless you feel completely safe doing so. They are stored on your computer; for your eyes only. Until a stranger hacks into your computer. Your personal photos are splashed on social media for strangers to view and critique unmercifully.

Or, imagine sharing photos with a trusted significant other, never imagining he or she would stoop so low as to share them with the entire world. Anyone can see your most unguarded moments.

Hunter Moore, 33, is reportedly seeking shelter with his parents in Woodlands, CA.

The perverted high school dropout was kicked out of a private Christian school in 8th grade due to anger issues — however, the fiend “has a huge ax to grind with mankind,” according to a local.

“He spent years fully immersing himself in the deep end of a pool of hedonism.”

Moore set a new low standard for unconscionable behavior with his notorious website ‘Is Anyone Up’ in 2012.

Moore’s site quickly morphed from titillating content to a full fledged campaign to ruin lives. When challenged on the legalities of his shenanigans, Moore scurried to hide behind Section 230 of the Communications Decency Act of 1996, which offers legal protection to providers and users of an interactive computer service publishing information provided by others. To put it simply, Moore claimed innocence because the content he displayed was provided by vengeful users—-not by him. He crossed the line of being on sound legal footing when he employed hackers to covertly obtain photos, as in Kayla Laws case.

Kayla’s mother — Charlotte Laws — a gutsy lady with a Ph.D. in Social Ethics, as well as two Master’s degrees and two BAs, who has authored multiple books, anthropologists and articles, promptly cried foul. Witnessing her daughter being ostracized at her restaurant job by coworkers and management for the topless shot featured on Is Anyone Up? took a toll on the entire family. Laws was outraged with the resistance she encountered as she tried to right the wrong. She contacted Moore and demanded that he take her daughter’s photo off his site. Moore stubbornly refused. Laws employed multiple lawyers to no avail.

The police and FBI took a nonchalant position, seeming to hold her daughter somewhat responsible for having the photos taken in the first place. Laws finally gained traction when Jeffrey Lyon, the president of Black Lotus Communications – the Internet security company that handled Moore’s website, became involved.  ‘He was extremely receptive to helping,’ Laws says. ‘He was able to block the page that had Kayla’s nude picture. But Hunter went around Jeffrey’s efforts and created a new page for Kayla,’ Laws said.

Undeterred, Laws’ outrage and tenacity propelled her forward and she ultimately prevailed. in 2012, she delivered a file of information to FBI on the other women victims she’d spoken too and they raided Moore’s home in Sacramento, California that he shared with his parents. Is Anyone Up? was closed in April 2012 and sold to an anti-bullying group. Moore and a colleague hacker named Charles Evens (who went under the alias of “Gary Jones”) who Moore recruited to hack into the phone of Kayla Moore were indicted on January 23, 2014, in a federal court in Los Angeles, California following an arrest by the FBI on charges of conspiracy, unauthorized access to a protected computer, and aggravated identity theft.

In a February 2015 plea agreement, Moore plead guilty to a felony charge of aggravated identity theft and aiding and abetting in the unauthorized access of a computer. He was sentenced In December 2015, to two years and six months in Federal Prison, a $2,000 fine, and $145.70 in restitution—a slap on the wrist considering the damage left in his wake. According to the Federal Bureau of Prisons Inmate Locator, Moore was released from prison on Sept. 22, 2017 and is currently serving three years of federal supervised release.

As part of the sex fiend’s plea agreement, he must notify his federal probation officer of every “computer, computer-related device, screen name, password, e-mail account or ISP” he uses during his supervised release.

The group encourages the posting of sexual photos and discussions one would expect from junior high age students with raging hormones and a juvenile knowledge of human sexuality. The sex scoundrel’s twisted views on anything related to intimacy and his blatant disregard for females are once again on display.

In a brief statement to yc.news, Charlotte Laws expressed concern about Hunter’s current internet activities, and said she reported his group and profiles to Facebook which has taken no action thus far.

We reached out to former Federal Prosecutor Eric D. Vandevelde who prosecuted the Moore case for comment who referred the matter to the U.S. Attorney’s Office in Los Angeles. Attempts for comment were unsuccessful.

Moore’s probation officer did not respond to repeated requests for comment.