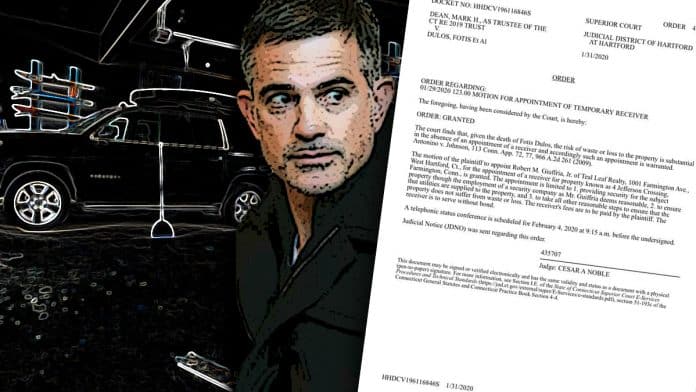 Police in Farmington smashed the window of the multi-car garage on the property Fotis Dulos was residing in an attempt to revive the 52-year-old after a suicide attempt on Jan. 28, and Your Content has obtained photographs from inside the horrific scene.

The photos, which FOX61 was first to report, show the garage and the Chevrolet Suburban where Dulos was found after attempting to take his life; damage to the garage door, damage to a window on a door leading into the garage; damages to two door locks, and a BMW M3 in the driveway.

The stunning photos come just after Your Content exclusively reported that a Hartford Superior Court judge granted the motion.

“The Court finds that, given the death of Fotis Dulos, the risk of waste or loss to the property is substantial in the absence of an appointment of a receiver and accordingly such an appointment is warranted,” the court order exclusively obtained by Your Content reads.

Scroll through the photos below…

This is an ongoing investigative special. Stay with yc.news for the latest updates. Have a story or news tip? Contact our 24/7 newsroom at 833.336.8013 or e-mail our tip line: [email protected]