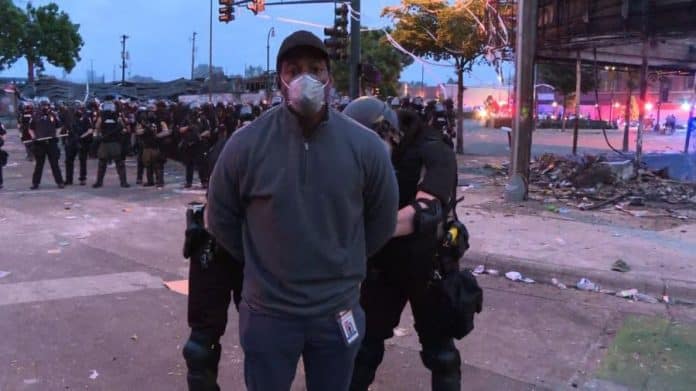 CNN journalist Omar Jimenez has been taken into police custody during a live broadcast at the site of the protests in Minneapolis, after clearly identifying himself to officers, Your Content has learned.

Charles Ramsey, former Philadelphia Police Commissioner says that Minnesota State Police will have to explain why they arrested the CNN crew, noting that they are allowed to be there.

The CNN camera was also taken into custody and continued to record as the crew was handcuffed, with police seemingly unaware that the camera was still on.

CNN called the arrest of its team in Minneapolis “a clear violation of their First Amendment rights” in a tweet.

“A CNN reporter and his production team were arrested this morning in Minneapolis for doing their jobs, despite identifying themselves — a clear violation of their First Amendment rights. The authorities in Minnesota, including the Governor, must release the three CNN employees immediately,” CNN said in a statement.

After the photographer was arrested, his camera was set on the ground and continued to transmit live images.

The crew was released sometime around 7:30 a.m.

Minnesota State Police did not return repeated requests for comment.