By Nik Hatziefstathiou, Ali Eslami and Jonathan Riches » for Your Content
Modified May 29, 2020
May 29, 2020
BREAKING NEWS 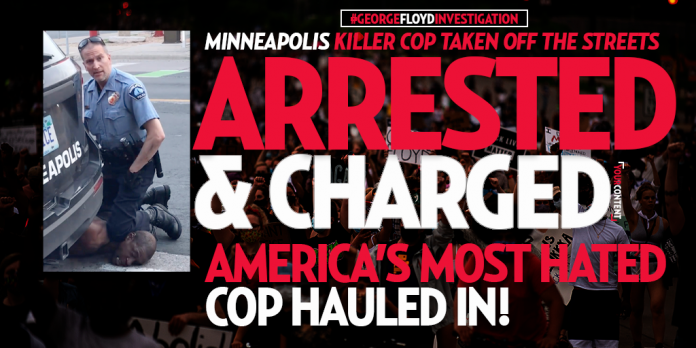 The Minneapolis police officer seen kneeling on George Floyd’s neck before his death on Monday has been taken into custody, the Star Tribune and WCCO report.

Hennepin County Attorney Mike Freeman said Derek Chauvin was charged with third-degree murder and manslaughter, after the office gathered enough evidence to prove the case beyond a reasonable doubt.

The police officer seen on video kneeling on the neck of George Floyd, a handcuffed black man who died in custody after pleading that he could not breathe, was hauled in by state officials Friday after three days of often-violent protests that resulted in fires and looting across parts of Minneapolis.

Freeman did not have immediate details, but said a criminal complaint would be made available later. The charges come after three days of protests, which had been escalating in violence.

“This goes all the way up to Washington,” said the individual briefed on the investigation into George Floyd’s death, who spoke to Your Content on condition of anonymity.

“Barr, at Trump’s recommendation, has asked the US Attorney’s Office’s elite team in Minneapolis on standby and ordered them to expedite the investigation as a matter of national security.”

“The President seems adamant on ending the threat against law enforcement for good by bringing everyone responsible to justice.”

The source said officials at the federal level are fed up with the racial discourse and ‘brotherhood of secrecy’ that initially slowed the investigation down.

“One officer is behaving very oddly. Anyone who invokes the Fifth Amendment is likely to get charged. Several officers have been playing the Minneapolis Police Department for years.”

“There’s been one delay after another – and the hammer is about to fall. The president is playing this somewhat close to the vest.”

“Washington said the officers’ savagery must be met with a commensurate response. A memo circulated noted: ‘Ferguson. History repeats itself and history is on our side in this fight!’”

“Barr was told to ‘take charge, take action and indict immediately,’” the insider continued. “Arrests are coming. It’s a matter of time. And the clock never ticked faster.”

On Thursday, multiple law enforcement sources exclusively told Your Content that charges should be expected within the next 96 hours.

“There will be at least two arrests within the next 96 hours,” the insider said. “There is a 100 percent chance that two of the officers will be charged in that time-frame.”

This story is breaking and will be updated as more information becomes available.