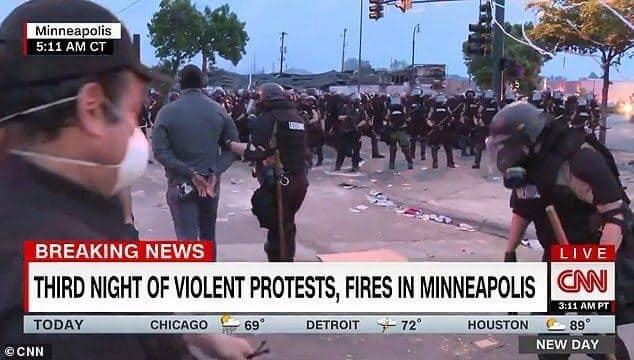 MINNESOTA State Patrol arrested four suspicious people they believed to be committing a crime Friday morning and following an intense 30-minute investigation — 3 of the four suspects were released, Your Content has learned.

“In the course of clearing the streets and restoring order at Lake Street and Snelling Avenue, four people were arrested by State Patrol troopers,” Minnesota State Patrol tweeted. “Including three members of a CNN crew. The three were released once they were confirmed to be members of the media.”

Despite the camera gear and CNN apparel, cops aren’t convinced the three were reporters. Following several phone calls, including one from the governor, authorities confirmed they were allegedly reporters.

“Y’all knew they were media when you cuffed them. Please don’t play with us today. We ain’t in the mood for it this morning!” said Sheletta Brundidge.

“If this occurred, before passing judgement, we would have to know what lead up to this arrest. On it’s face, it appears the many officers are losing their composure, in demonstrating their loyalty to each other,” prominent Philadelphia criminal defense attorney A. Charles Peruto, Jr. told Your Content.