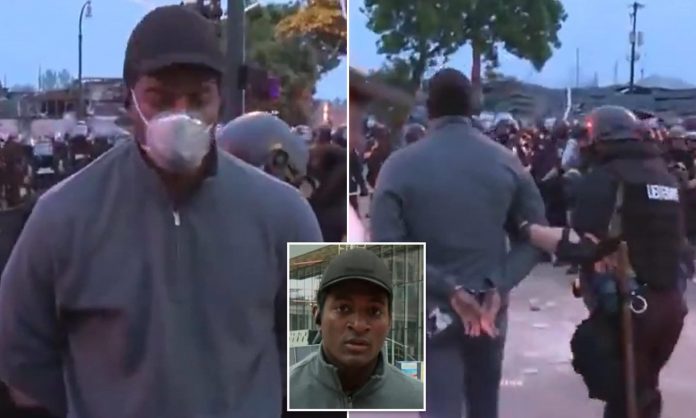 OUTRAGED individuals took to social media Friday morning after hearing a CNN crew had been released from custody following an apparent 30-minute arrest, Your Content has learned.

“I mean it’s CNN but it’s nice to see someone get arrested I mean the people rioting and burning shit down would have been my first choice but CNN would have been on the list.”

“It was probably fake, then once the camera stopped they all shook hands and laughed,” said John Wheeler.

As Your Content readers know, CNN journalist Omar Jimenez has been taken into police custody during a live broadcast at the site of the protests in Minneapolis.

Brian Kelly says all staffers should be quizzed and locked up by cops for inciting riots.

“They need to go and lock everybody up at CNN for encouraging this race war in America,” Kelly said.

“CNN does not lose when the city gets burned to the ground. You know who looses the citizens of Minneapolis.”

According to Mr. Delgado, the crew was working hand-in-glove with the arresting officers, filming an apparent ‘reality show.’

“I got it from a good source that he was arrested for lying to police. He said he was a reporter and that he works for CNN, but we all know CNN don’t have reporters. They employ clowns at the Clown News Network,” he added.

After being released, Jimenez returned to the air. He said: ‘Everyone was pretty cordial.

“I said to the officer who arrested me, ‘look, we’re going to be here for the next few days. Where do you want us to be?’ And he said ‘I don’t know, I’m just following orders.’”

‘That conversation may have happened above some of the people we were with. For us, they came back and said: “You’re with CNN, correct?”

The protests in Minneapolis raged on Thursday night for a third night in a row as Floyd’s death continued to shock the world.