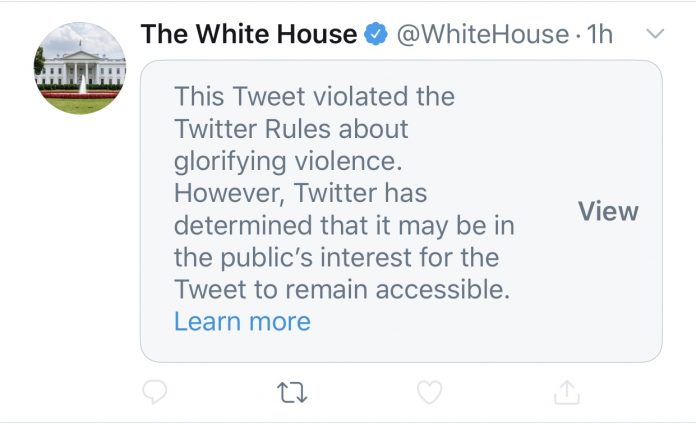 The official White House Twitter has been censored despite a lengthy Executive Order signed by President Trump Thursday prohibiting online censorship, Your Content has learned.

President Trump lashed out at Twitter Friday morning for covering up his tweet with a warning label that said it was “glorifying violence.”

“Twitter is doing nothing about all of the lies & propaganda being put out by China or the Radical Left Democrat Party. They have targeted Republicans, Conservatives & the President of the United States.” President Trump said.

“Section 230 should be revoked by Congress. Until then, it will be regulated!”

President Trump added: “These THUGS are dishonoring the memory of George Floyd, and I won’t let that happen. Just spoke to Governor Tim Walz and told him that the Military is with him all the way. Any difficulty and we will assume control but, when the looting starts, the shooting starts. Thank you!”

The @WhiteHouse version also carried a warning shortly after it was posted.

The censor forbids users from sharing the information, ‘calling it inaccurate.’

There’s been chaos in the Minnesota city since a white police officer took the life of a black man, George Floyd, by kneeing him in the neck until he stopped breathing.