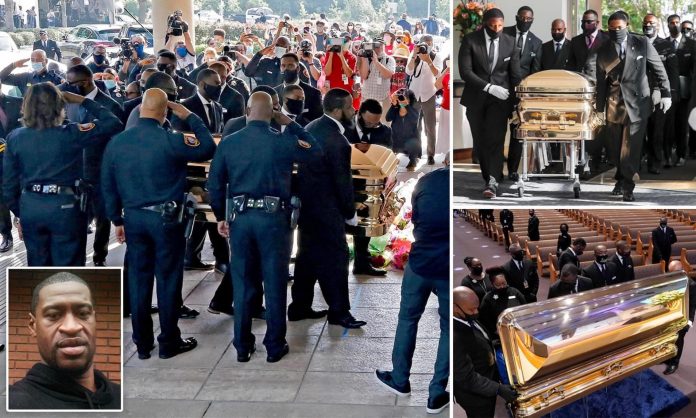 GEORGE FLOYD, the black man whose brutal death at the hands of police has sparked a worldwide reckoning over racial injustice, will be laid to rest in his hometown of Houston today in a private funeral service.

The service will be held for Floyd at the Fountain of Praise Church at 11am local time, where family and friends will pay their final respects.

On May 25, as a white Minneapolis officer pressed his knee on Floyd’s neck for an agonizing eight minutes and 46 seconds, the dying man cried out for his mother before his last breath.

City officials will close the streets within a mile of the cemetery, but supporters can still watch the procession.

As of Tuesday morning, fences were placed along Cullen Boulevard to allow people to pay their respect to Floyd. While city officials say they do not know how many people will arrive, they are prepared for a massive crowd.

In the past two weeks, sweeping and previously unthinkable things have taken place: Confederate statues have been toppled, police departments around America have rethought the way they patrol minority neighborhoods, legislatures have debated use-of-force policies, and white, black and brown people have had uncomfortable, sometimes heated, discussions about race in a nation that is supposed to ensure equal opportunity for all.

Calls for ‘defunding the police’ have cropped up in many communities, and people around the world have taken to the streets in solidarity, saying that reforms and dialogue must not stop with Floyd’s funeral.

Meanwhile, former Vice President Joe Biden met with Floyd’s family Monday, according to a photo posted on Twitter by the Rev. Al Sharpton. Biden will provide a video message for Floyd’s funeral service. Previous memorials have taken place in Minneapolis and Raeford, North Carolina, near where Floyd was born.