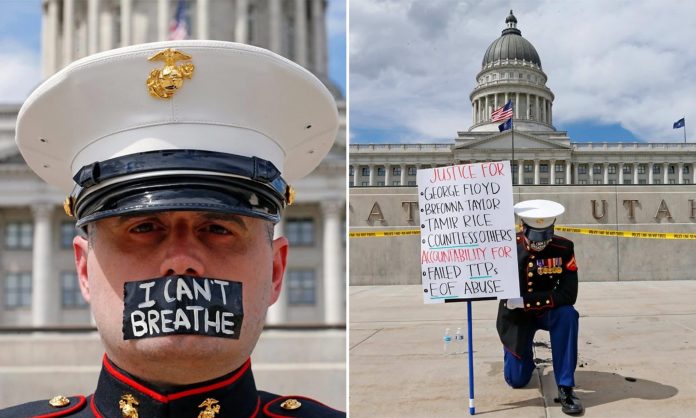 US MARINE veteran who won Purple Heart while serving in Iraq stages one-man Black Lives Matter protest for three hours in 99-degree heat in Utah, Your Content has learned.

Declaring his support for Black Lives Matter — US Marine veteran, Todd Win, kneeled in full dress uniform near the Utah State Capitol in a one-man protest with a piece of tape over his mouth with the words “I can’t breathe” written on it.

A local photographer Robin Pendergrast, snapped photos of Winn for the Associated Press.

The retired American hero drew the attention of passersby as he stood for three hours in the middle of the day in Salt Lake City, when the temperatures reached 99 degrees Fahrenheit.

It was so hot during his protest Friday that Winn’s dress leather shoes began to melt, according to KUTV-TV.

EOF is the acronym for ‘escalation of force’ – which is presumably a criticism of American police forces who have been filmed on social media in recent weeks injuring protesters and demonstrators.

Katie Steck, Winn’s girlfriend, said that Friday was a “day of silence” for him.

“He has been very angered and appalled by the injustices that have been happening,” she told KSL-TV.

According to Steck, Winn was wounded in 2005, when a roadside bomb detonated while he was doing a tour of duty in Iraq.

“That’s not what he wants to represent.”

In security-related matters, TTP is the acronym for “tactics, techniques, and procedures.”