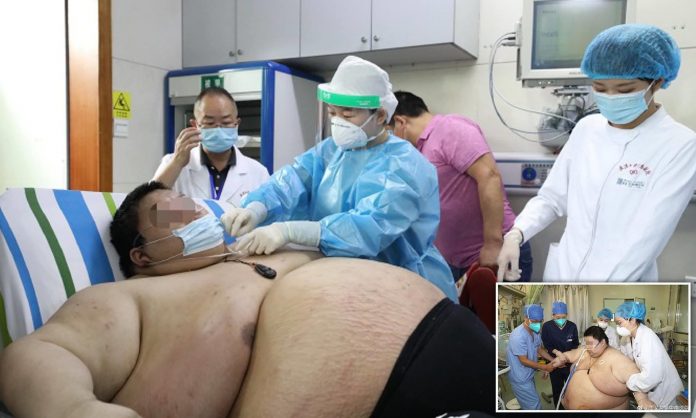 A 26-year-old man in Wuhan has gained 225 pounds in the space of five months while staying at home to avoid COVID-19, according to doctors who relayed the message to Your Content.

Mr Zhou had to be rushed to hospital by an ambulance earlier this month after falling critically ill because of the sudden increase in his weight.

He now weighs 616 pounds and is reported to be the heaviest man in Wuhan.

Footage and images released by the Zhongnan Hospital of Wuhan University show medical workers examining Mr Zhou after he was admitted to the hospital on June 1.

Mr Zhou, a worker at an internet cafe, stopped leaving home when the city went into lockdown in late January.

FURTHERMORE, Mr Zhou did not step out of his shed for five months, and as a result, his weight grew by a further 224 pounds.

Li Zhen, a doctor from Zhongnan Hospital of Wuhan University, received a phone call on May 31 from Mr Zhou desperately asking for help.

After being given round-the-clock care for nine days, the Wuhan resident’s condition finally became stable. He was transferred to a regular ward yesterday.

His story was revealed by the hospital in a social media post today. However, the hospital did not explain the exact cause of Mr Zhou’s sudden weight gain.