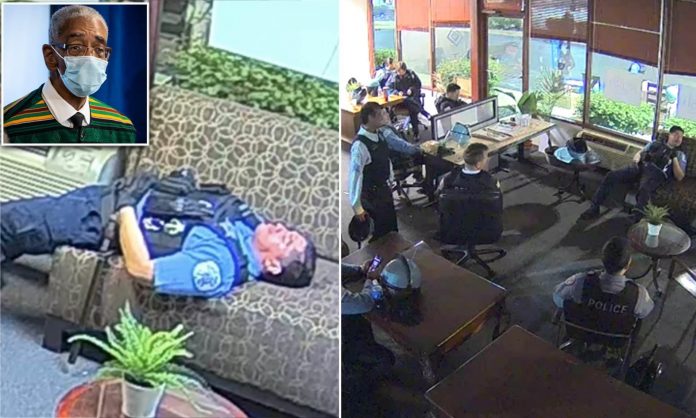 U.S. Representative Bobby Rush revealed Thursday that more than a dozen Chicago cops were caught on CCTV lounging in his campaign office and drinking coffee while nearby businesses were being looted, Your Content has learned.

Rush, Chicago Mayor Lori Lightfoot and police chiefs slammed the actions of the officers who were seen on their phones, making popcorn, and even napping after they were called to investigate a break-in at the office on June 1.

The congressman said the officers involved had “unmitigated gall” to be taking a break there “while looters were tearing apart businesses within their sight and within their reach.”

The epic episode was announced in a press conference on Thursday in which images of the officers and their actions were shared by the outraged political party and their sidekicks.

Rush said that he received a call nearly two weeks ago telling him that his office at 5401 S. Wentworth Ave. had been broken into.

The cops are first shown entering at around 1am on June 1 and several officers make use of the office at differing times.

“One was asleep on my couch in my campaign office,” cried Rush, who was at his guarded community as officers took cover.

“They even had the unmitigated gall to go and make coffee for themselves and to pop popcorn, my popcorn, in my microwave while looters were tearing apart businesses within their sight and within their reach.

“They took such a lackadaisical attitude, a non-caring attitude in my own personal space while looting was occurring all around them. They didn’t care. But I stand here to salute our great mayor,” Rush added as he wept over stolen popcorn.

During the press conference, Lightfoot showed stills from the footage of the cops as she condemned their behavior.

“Not one of these officers will be allowed to hide behind the badge and go on and act like nothing ever happened,” she said.

“These individuals were lounging in a congressman’s office, having a little hangout for themselves while businesses on the South Side were getting looted and burned.”

“I believe we should take the strongest possible action. Particularly with supervisors,” Lightfoot said.

Congressman Rush co-founded the the Illinois Black Panther Party in 1968 in the wake of Martin Luther King Jr’s death.

According to the Chicago Tribune, Rush previously said that that those voting for Lightfoot had “the blood of the next young black man or black woman who is killed by the police” on their hands.

It comes after string of incidents involving Chicago cops and their alleged misconduct during the recent civil unrest that are now under investigation.