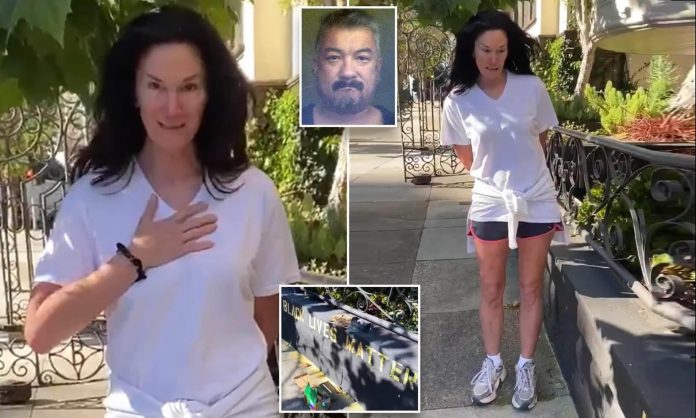 SAN FRANCISCO’S Lisa Alexander, who owns LA Face Skincare, was dubbed a ‘Karen’ after a video circulated Friday showing her accusing a man of illegal action for chalking the phrase onto a wall on his San Francisco property, Your Content has learned.

The man, identified as Jaime Toons, said Alexander lied and said she knew who lived in his home.

Alexander has since deleted all her social media accounts and websites and at least one beauty business has cut all ties with her company.

Toons posted the video of his run-in with Alexander to Twitter explaining: “A white couple call the police on me, a person of color, for stenciling a #BLM chalk message on my own front retaining wall.”

The video starts with Alexander asking, “Is this your property?” as a white man with her named Robert stands apart and also films the interaction.

“I’m asking you if this is your property?” she demands again.

“Why are you asking that?” Toons responds.

“Because this is private property, sir,” the man with Alexander responds. “So, are you defacing private property or is this your home? You’re free to express your opinions but not on people’s property.”

Alexander continues to stand in front of Toons and says, “It’s just respect.”

“Your sign is good. This is just not the way to do it,” she adds, referring to the ongoing Black Lives Matter protests.

As the couple don’t appear to believe that Toons could live in the home, he asks, “If I did live here and this was my property this would be absolutely fine? And you don’t know if I do live here …”

Alexander interrupts to say “we actually do” know the people that live there.

“That’s why we’re asking. We know the person who does live here,” she states. “I’m not disagreeing.”

Toons then suggests that Alexander calls the person who she believes lives there or to contact the police instead.

“Your options are to call the police if you believe I’m committing a crime,” he says.

“I’ll be more than happy to talk to them.”

The pair continue to argue over who is in the wrong and exchange first names before Alexander walks away and Toons tells her he’d wait there until the cops arrived.

“And that people is why Black Lives Matter,” he says, showing his chalked front wall as the couple leaves and Alexander can be seen on her phone.

“That’s Karen and shes calling the cops and this is gong to be really funny because she knows the people who live here ‘personally.’”

Toons later added on Twitter that the cops did arrive after Alexander called them but left “without even getting outta the car.”

“Don’t be mad that a POC outsmarted TWO WHITE PEOPLE,” he wrote.

“Why do you think I started recording? So, I could record a pleasant conversation with a racist who wouldn’t believe I lived in a big old house?”

Alexander has been harshly condemned for her actions but is yet to make a comment on the video.

‘We have not worked with LAFACE for several years & as a result of the CEO’s actions today have officially cut ties with them,’ it said in a statement, according to Metro.

“We’ve removed their products from our website & will not be working with them in the future.”