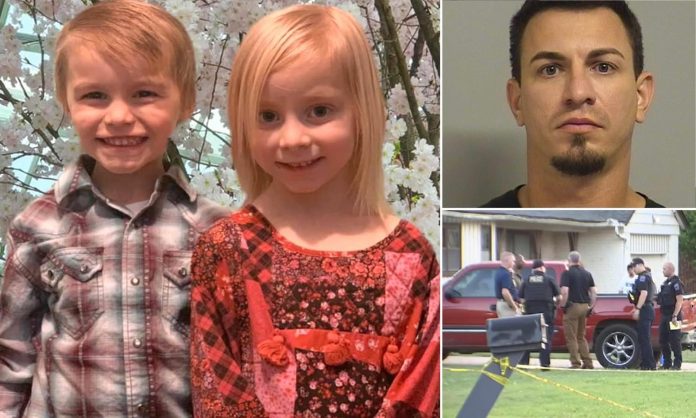 AN OKLAHOMA dad has been arrested after police say he left his two young children locked inside a truck for five hours to take a peaceful nap. By the time he woke up, the children were dead, Your Content has learned.

Dustin Lee Dennis, 31, now faces two counts of second-degree murder after his beautiful young children, Teagan, 4, and Ryan, 3, were found dead as the monster slept nearby.

Dennis claimed to cops that he took a drive to a QuikTrip convenience store at around noon before returning to his Tulsa home and falling asleep.

After waking, Dennis told police that he was unable to find his children, according to FOX 23.

BUT the plot took a twisted turn when police were told the merciless dad was witnessed exiting his truck and locking the kids inside as he journeyed to rest.

“The children had not been checked on for nearly five hours during the time they were locked inside vehicle,” an arrest report as seen by the television station states.

The neglectful father is currently in the Tulsa County jail on a $750,000 bond.

Although it has not been revealed how the children died, temperatures in Tulsa were extremely hot on Saturday and were in the low 90’s Fahrenheit.

Writing on his Facebook profile on Thursday, Dennis appeared to write about the love he held for his children, who did not live with him, online.

“2 in the morning up watching my kids sleep, I can’t believe they’re mine, I love them so much and nobody in this world could ever make me feel as loved as they do. The other day I was so depressed because I just missed them, and I got to thinking of when they get older and become adults,” he typed.

The former dad said those without children just don’t understand the situation.

“If you don’t have kids you may not understand this but that is the scariest but most amazing thing to think of, watching them become their own person and seeing what they will experience and achieve. I hope our bond only grows stronger, I hope they always want to call me or see me just to talk or ask for advice. I can’t imagine this world without them,” he spewed hours before being hauled in and charged by authorities.

Children being left in the car can suffer heatstroke within a matter of minutes.

Some criminal caregivers “knowingly” leave children inside cars, as the kids “are sleeping and don’t want to disturb them in the hope they’ll get back before they awake.”

The interior temperature of a car can quickly soar with 80 percent of the total temperature rise happening in the first 30 minutes a child is inside a car.