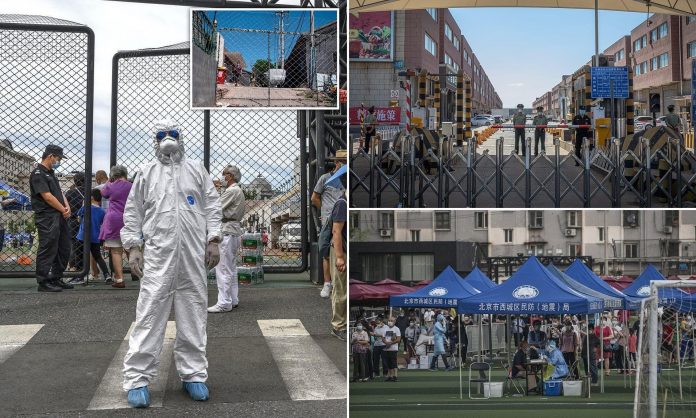 BEIJING residents are being rounded up and put in quarantine as the city goes back into lockdown, schools are shut and travel bans are reintroduced to stop “extremely severe” new coronavirus outbreak blamed on “European salmon,” Your Content has learned.

Footage reveals officials in hazmat suits barking orders through a megaphone while people line up in queues and pack into buses amid fears that a second wave of virus cases is about to hit the country.

Activist Jennifer Zeng, who posted the footage, claims that seven hotels were requisitioned as quarantine sites with people rounded up in an all-day operation after an outbreak linked to the Xinfadi wholesale market.

Beijing has today reported 27 new infections from the Xinfadi cluster and cases have spiked in recent days after mass testing and draconian lockdowns appeared to have brought China’s outbreak to a virtual standstill.

The boss of the Xinfadi market on Saturday told reporters that researchers had found traces of the novel coronavirus on a chopping board used to cut imported salmon.

Today’s new cases took the number of confirmed infections in Beijing over the past five days to 106, as officials locked down almost 30 communities in the city and tested tens of thousands of people.

Those at most risk of having come in contact with the virus were also banned from leaving the city, in measures echoing the drastic lockdown in Wuhan where the disease was first detected late last year.

“A cluster like this is a concern and it needs to be investigated and controlled — and that is exactly what the Chinese authorities are doing,” WHO emergencies director Mike Ryan said.

“The infectivity of a virus would grow stronger or weaker during its evolution, but I believe the [strain of] coronavirus found in Beijing’s Xinfadi market is more powerful than the one from Wuhan’s Huanan market,” the expert told state media The Global Times.

“The epidemic situation in the capital is extremely severe,” Beijing city spokesman Xu Hejian warned at a press conference.

The country’s Vice Premier Sun Chunlan urged the city’s officials to impose ‘the strictest’ virus control measures to contain the spread of the virus, which has been linked to a massive food wholesale market called Xinfadi.

China claimed that the source of Beijing’s fresh coronavirus outbreak had come from Europe.