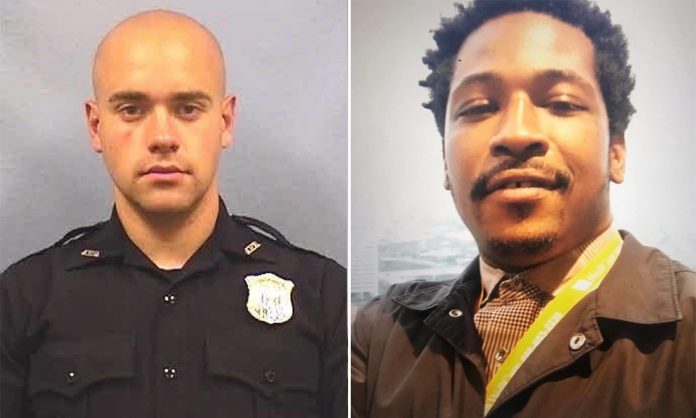 PAUL Howard, the district attorney in Fulton County, Georgia, announced charges against the former police officer who fatally shot a black man and another officer who was at the scene in Atlanta last week.

Former officer Garrett Rolfe, 27, shot Brooks twice in the back on Friday June 12 when a peaceable call-out suddenly escalated into unspeakable violence.

Officer Rolfe is recommended to be held on no bond. His partner agreed to testify against him to get out of jail as early as today.

Barrett Rolfe, 27, has been charged with felony murder and aggravated assault  for shooting Brooks twice in the back on June 12. Rolf faces a possible sentence of life in prison without parole or the death penalty.

Howard said Rolfe kicked Brooks after he was shot and the other officer admitted to standing on his shoulders.

Fellow officer Devin Brosnan, 26, who was first to respond to the 911 call-out that reported Brooks drunk and asleep at the wheel in the drive-thru lane of Wendy’s on University Avenue, Atlanta, has been placed on administrative duty. Brosnan faces three charges including aggravated assault.

“The officer kicked Mr. Brooks while he was on the ground dead,” said Howard, noting a second cop stood on his shoulders.

Rolfe’s body-cam came off during the violent altercation that erupted when he tried to cuff Brooks telling him he’d had too much to drink to be driving.

Your Content readers were first to know that charges to which Brooks pleaded guilty and for which he was still on probation dated back to August 2014 when he was convicted on four counts – False Imprisonment, Simple Battery/Family, Battery Simple and Felony Cruelty/Cruelty to Children.

He was tried in Clayton County and sentenced to seven years on the first count, with one year in prison and six on probation and 12 months for each of the other three counts, sentences to be served concurrently.

His sentence was revised, and he was sent back to prison for 12 months in July 2016 when he violated the terms of his probation.

Brooks had not been in trouble since that year until last December when he went to Ohio without informing his probation officer and a warrant was issued for his arrest.

That warrant was revoked and the case dismissed when he returned to Georgia on January 6.

Atlanta Police Department have released both officers’ disciplinary records which showed that Rolfe had twelve reports made against him including five vehicle accidents, four citizens’ complaints, one use of force and one firearms discharge in addition to the Brooks incident.