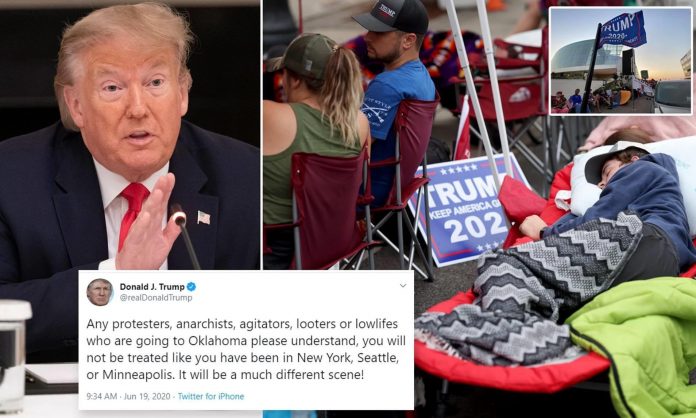 MAYOR G.T. Bynum of Tulsa has issued an executive order barring President Donald Trump violence groups — such as Antifa — from being entering the premises, issuing an emergency curfew citing ‘hazardous environments,’ Your Content has exclusively learned.

According to police, they are moving the people who are camped out around the BOK Center. The only people allowed in the area are those who work or live there.

“I have received information from the Tulsa Police Department and other law enforcement agencies that shows that individuals from organized groups who have been involved in destructive and violent behavior in other States are planning to travel to the city of Tulsa for purposes of causing unrest in and around the rally,” Bynum wrote in the executive order.

These “groups in other states have engaged in extremely violent and destructive behaviour, including arson and malicious injury to both public and private property,” the president noted.

“Any protesters, anarchists, agitators, looters or lowlifes who are going to Oklahoma please understand, you will not be treated like you have been in New York, Seattle, or Minneapolis. It will be a much different scene!” President Trump wrote on Twitter.

“In the interest of National Security, a federal exclusion zone is being established in the vicinity of the rally,” the order reads.

Police say this is to keep people safe as they prepare for one of the biggest crowds Tulsa has seen.