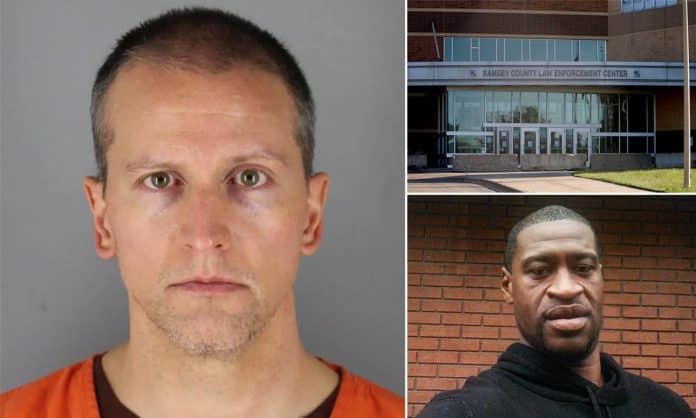 Eight minority corrections officers in Minnesota filed discrimination charges with the state Department of Human Rights saying that they were barred from guarding or making contact Derek Chauvin, the white former police officer charged with executing George Floyd, Your Content has learned.

Chauvin, 44, was booked at the Ramsey County Jail in St. Paul, Minnesota, the same day he was charged with third-degree murder and manslaughter in the death of George Floyd on Memorial Day. Those charges would later be upgraded to second-degree murder.

Just as the neck-kneeling cop arrived, all officers of color were ordered to exit the area and stay in a separate wing.

Prison supervisors said their skin color is a safety liability for Chauvin, The Star Tribune reported.

“I understood that the decision to segregate us had been made because we could not be trusted to carry out our work responsibilities professionally around the high-profile inmate — solely because of the color of our skin,” one active sergeant wrote.

“I am not aware of a similar situation where white officers were segregated from an inmate.”

Attorney Bonnie Smith, who is representing the eight officers, said the move has left a lasting and damaging impact on worker morale.

“I think they deserve to have employment decisions made based on performance and behavior,” said Smith.

“Their main goal is to make sure this never happens again.”

Jail Superintendent Steve Lydon reportedly told his superiors that the decision was made in haste after he was informed Chauvin would arrive in 10 minutes.

The move was made “to protect and support” minority employees by keeping them away from Chauvin.

“Out of care and concern, and without the comfort of time, I made a decision to limit exposure to employees of color to a murder suspect who could potentially aggravate those feelings,” Lydon reportedly said in a statement amid an internal investigation and provided to The Star Tribune.

A Black sergeant who usually oversees the transport of high-profile inmates began a routine pat-down of Chuavin, but was soon ordered to stop. He was replaced by a white officer, according to charges.

A colleague reportedly told him that Lydon had instructed all minority employees from the fifth floor, where Chuavin was housed, and banned any interaction with Chauvin.

In each instance, minority officers were reportedly swapped out for white officers to perform standard duties.

The group of minority officers later gathered on the third floor to discuss the unusual change and console each other over what they deemed a “segregation order.”

Some officers cried, while others wondered if they should quit their jobs, according to charges obtained by The Star Tribune.

Those who had complaints were told to talk to Lydon.

Written statements show all eight officers scheduling time to speak with Lydon, where he reportedly admitted to banning the officers from the fifth floor but was adamant that it wasn’t racism.

Lydon reportedly said during his interview that he acknowledged that George Floyd’s death could “likely create acute racialized trauma” and felt responsible to protect minority staffers from Chauvin.

The next day, several officers reported seeing surveillance footage that showed a white lieutenant, who was given special access to Chauvin’s jail cell, sitting on his bunk bed and allowing him to use her cell phone.

Such actions are considered a significant policy violation and caused officials to move Chauvin to the Hennepin County jail before finally being placed in the Oak Park Heights maximum security prison.

After the incident, dozens of jail staffers reportedly met with Sheriff Bob Fletcher and had an acting sergeant read a two-page letter on behalf of minority employees.

The letter read: “I immediately left feeling sick to my stomach. The hurt and anger these officers displayed was evident not only in their body language, but in their voice.”

The sergeant alleged that the order had caused tension among staff and cast doubt on the professionalism of officers.

Fletcher promised to reassign Lydon from the jail and send an e-mail about how the agency could move past the incident, The Star Tribune reports. Staffers said he never did.

As of Saturday, a sheriff’s office spokesperson said Lydon had been removed from his position as a jail superintendent and will report to Undersheriff Bill Finney, who is leading the Detention Division in the interim.

Fletcher is reportedly “reviewing the matter to determine if any additional action is necessary,” the spokesperson said.

When Reuters questioned the segregation orders, the spokesperson initially said there was “no truth to the report” and that Chuavin “was treated according to procedure.”

The blatant denial of any wrongdoing was salt on the wound for officers of color.

“They were calling us all liars,” one acting sergeant told The Star Tribune. He asked to be anonymous over fears of retaliation.

“I can’t go to work and hold my head up knowing that they can just brush this under the rug.”

The spokesperson said he responded that way because “When I asked, that’s what I was told.”

All eight employees deemed the order the “most overtly discriminatory act” they’ve experience while working for the Ramsey County Jail.

One officer noted that when a man is booked for domestic assault charges against a women, female officers are not ordered to avoid them despite how they may feel.

“My fellow officers of color and I were, and continue to be, deeply humiliated, distressed, and negatively impacted by the segregation order,” the charges said.

“The damage had been done,” said attorney Bonnie Smith. “These jobs are super sensitive, highly dangerous at times and involve an immense amount of trust.”

“They struggle walking into a building where the superintendent is still affiliated.”