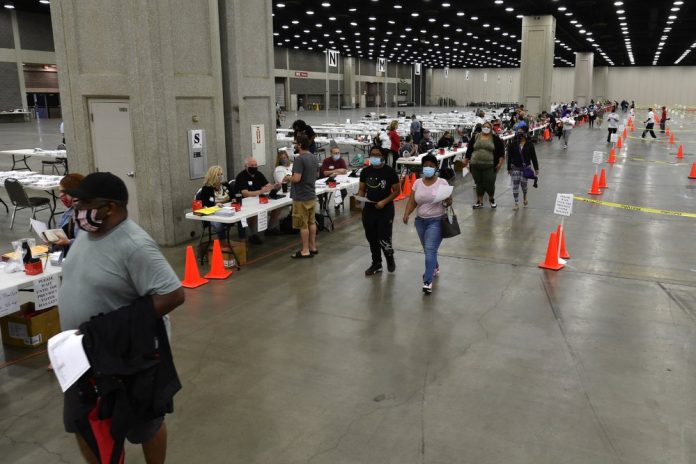 Kentucky Republican Rep. Thomas Massie, a libertarian-minded maverick who often clashes with GOP leaders, was renominated for a sixth House term. Trump savaged Massie in March as a “disaster for America” who should be ejected from the party after he forced lawmakers to return to Washington during a pandemic to vote on a huge economic relief package.

Cawthorn, who uses a wheelchair following an accident, will meet the constitutionally mandated minimum age of 25 when the next Congress convenes. Cawthorn has said he’s a Trump supporter, and Massie is strongly conservative. Still, their victories were an embarrassment to a president whose own reelection campaign has teetered recently.

As states ease voting by mail because of the coronavirus pandemic, a deluge of mail-in ballots and glacially slow counting procedures made delays inevitable. That torturous wait seemed a preview of November, when more states will embrace mail-in voting and officials warn that uncertainty over who is the next president could linger for days.

Kentucky usually has 2% of its returns come from mail ballots. This year officials expect that figure to exceed 50%, and over 400,000 mail ballots were returned by Sunday.

New York officials expect the vast majority of votes to be mail ballots this year, compared to their typical 5% share. Counties have until eight days after Election Day to count and release the results of mail ballots, with 1.7 million requested by voters.

In Kentucky, many counties including Jefferson, the state’s largest, faced piles of mail-in ballots and reported no results. The Associated Press doesn’t expect to call the McGrath-Booker race until June 30, when Kentucky plans to release additional tallies.

In Kentucky, many counties including Jefferson, the state’s largest, faced piles of mail-in ballots and reported no results. The Associated Press doesn’t expect to call the McGrath-Booker race until June 30, when Kentucky plans to release additional tallies.