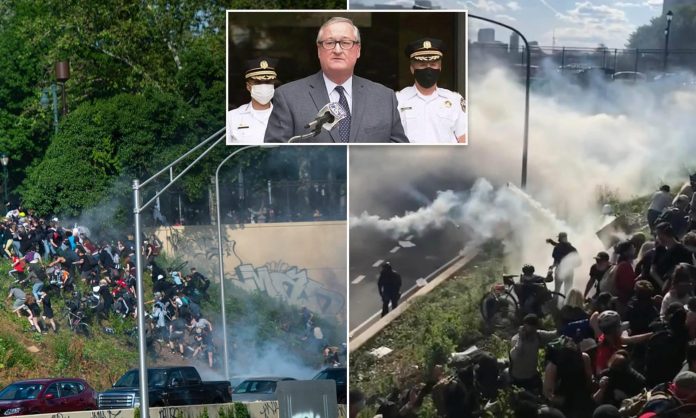 MAYOR JIM KENNEY of Philadelphia and the city’s police department have apologized to the public and announced they will ban the use of tear gas after cops were seen spraying dozens of peaceful protesters trapped on a highway during a demonstration earlier this month.

Mayor Jim Kenney spoke out against the city’s response to the June 1 protest after video footage emerged showing law enforcement use gas, bean bags and pepper spray to disperse crowds on the Interstate 676.

“Members of the department made decisions on use-of-force that were completely unacceptable,” he said in a news conference on Thursday.

“I have now personally viewed video evidence that largely contradicts the material portions of those statements,” she said.

Outlaw issued an immediate moratorium on the use of tear gas in most situations including to disperse crowds of non-violent people.

The apologies and personnel decisions came as The New York Times released a reconstructed video of the highway confrontation.

Footage showed cops firing tear gas at dozens of protesters after they became trapped by SWAT team officers on both sides, many unable to retreat to an on-ramp, clambering to get up a steep embankment then over a concrete wall and fence.

Mayor Kenney said he regretted giving the okay the day before the highway incident to use tear gas to disperse people in a much more violent protest in West Philadelphia, where stores had been broken into and a line of police cars was vandalized.

“In that moment of decision on Sunday, May 31, I ignored what my instincts told me,” he said, stressing his regret.

“I have never believed tear gas was an effective tool. When I’ve seen other cities use it in protests. It always seemed to me to make situations worse. And it has.”

Deputy Commissioner of Special Operations Dennis Wilson said he had not notified or sought approval from Outlaw to deploy tear gas or other ‘less than lethal’ weapons during the interaction with protesters on the interstate.

The Times’ video showed dashboard camera footage from the Pennsylvania State Police of an empty vehicle being vandalized.

A message from The Associated Press asking to clarify whether the trooper had left his car prior to the vandalism was left with state police.