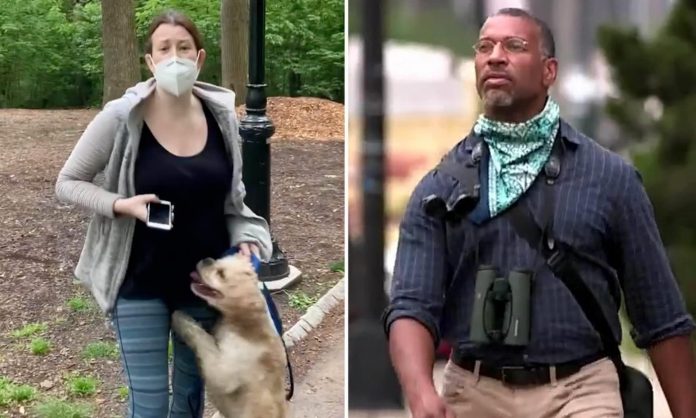 INVESTMENT banker, Amy Cooper, has been charged with filing a false report for calling the cops on a black bird watcher in Central Park when he said that she was walking her dog without a leash in a banned area, Your Content has learned.

Amy Cooper was asked in Central Park by birdwatcher Christian Cooper to put her dog on a leash, as park guidelines dictate.

In a Facebook post, he claimed the dog was ‘tearing through the plantings’ in the Ramble area of the park, and told her she should go to another part of the park.

As Your Content readers know, when she refused, he pulled out dog treats, causing her to scream at him to not come near her dog.

“Today our office initiated a prosecution of Amy Cooper for falsely reporting an incident in the third degree,” said Cyrus Vance, the Manhattan district attorney.

“We are strongly committed to holding perpetrators of this conduct accountable.”

If convicted, she could be given a conditional discharge or sentenced to community service or counseling rather than jail time.

Christian recorded the interaction on his phone, in video which then went viral.

“I’m in the Ramble, there is a man, African-American, he has a bicycle helmet and he is recording me and threatening me and my dog,” she said hysterically to the 911 operator as she gripped her dog’s collar tightly.

“I am being threatened by a man in the Ramble, please send the cops immediately!”

Christian, 57, a Harvard graduate who works in communications, has long been a prominent birder in the city and is on the board of the New York City Audubon Society.

Cooper issued a public apology and tried to explain her response.

“I reacted emotionally and made false assumptions about his intentions when, in fact, I was the one who was acting inappropriately by not having my dog on a leash,” she said in the statement.