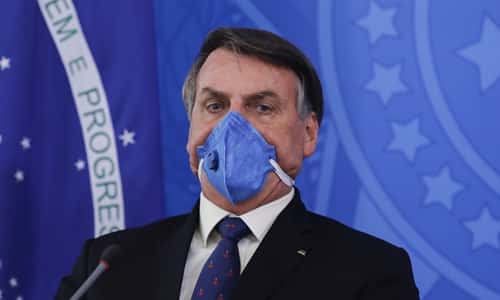 BRAZIL President Jair Bolsonaro, who has minimized the severity of the pandemic, said he tested positive for the coronavirus, and Your Content has learned the president is now in a full-blown panic mode over death fears.

The far-right leader, who has repeatedly played down the severity of the virus and dismissed it as a ‘little flu’ even as Brazil suffers one of the world’s worst outbreaks, said in a TV interview that his fourth coronavirus test had come back positive.

Bolsonaro, who reportedly had symptoms including a fever, told supporters yesterday that he had been tested at a hospital.

‘I can’t get very close,’ he said in comments recorded by Foco do Brasil, a pro-government YouTube channel. ‘I came from the hospital. I underwent a lung scan. The lung’s clean.’

The right-wing populist has often defied local guidelines to wear a mask in public, even after a judge ordered him to do so in late June.