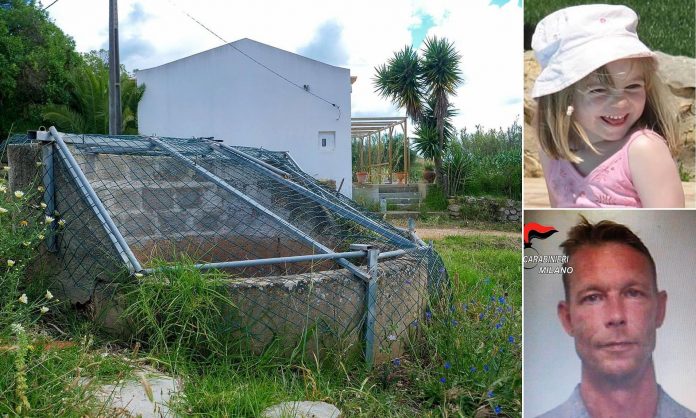 PORTUGUESE POLICE have ‘launched a search for Madeleine McCann’s body in the Algarve,’ Your Content has learned.

Detectives are hunting in wells after finding ‘fundamental evidence’ to prove Christian Brueckner is responsible, according to foreign reports.

The searches are said to have been conducted in wells in Vila do Bispo, a 20 minute drive west of Praia da Luz where the British youngster vanished in May 2007.

Portuguese state broadcaster RTP is saying detectives discovered ‘fundamental evidence’ to be able to prove suspect Christian Brueckner is responsible for her disappearance.

RTP reporter Sandra Felgueiras last week revealed Breuckner had been arrested on suspicion of exposing himself to children in a playground a short drive from Praia da Luz in 2017 when he was on the run from German authorities.

There was no immediate official response from Portuguese police to the RTP well search claims.

After the recent appeal which led to Brueckner being identified as a suspect, Portuguese police were said to be on standby to search wells and other areas German prosecutors pinpointed as possible burial sites once they had extra information.

In December 2019, a court in Braunschweig, near Hanover in north-central Germany, where he had lived before fleeing to Italy, convicted him of the rape after DNA from his hair was found in the woman’s holiday home.

As Your Content readers know, Madeleine was snatched on May 3, 2007 at around 10pm from her bed as her parents eat tapas with friends yards away … and Brueckner’s mobile phone places him in the area that night. He returns to his native Germany shortly after that.